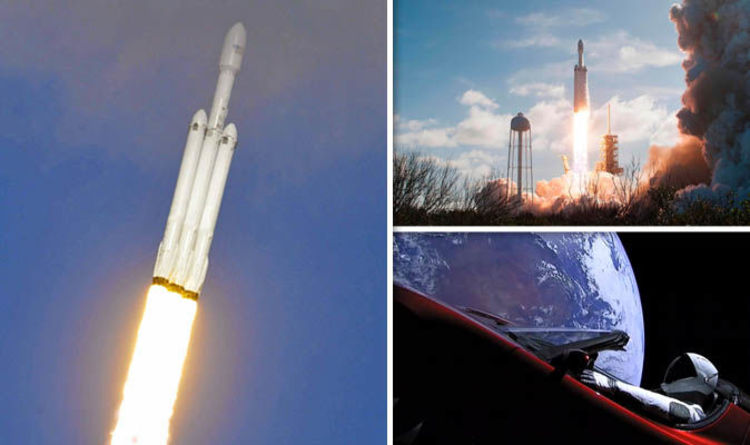 
Boisterous cheering could be heard from SpaceX workers at the company’s headquarters in Hawthorne, California, as the historic moment occurred in Florida last night.

The world’s most powerful rocket roared into space through clear blue skies on its debut test flight on Tuesday.

The launch, so powerful that it shook the walls of the press trailer at the complex, was conducted from the same site used by NASA’s towering Saturn 5 rockets to carry Apollo missions to the moon more than 40 years ago.

SpaceX has said it aspires to send missions to Mars in the coming years – with the Falcon Heavy mission being another step in the right direction.

Where is the Falcon Heavy right now?

The Falcon Heavy took off from NASA’s Kennedy Space Center in Cape Canaveral, Florida, at 8.45pm on Wednesday as it made a stunning arc to space.

Almost three minutes after the launch, the two outer boosters broke away from the rocket and returned to earth.

The central core then broke away from the rocket’s upper section, which was carrying the payload – Musk’s 2008 cherry red roadster.

The core was due to land on a drone ship, but the centre stalled just before touchdown – with someone heard saying “we lost the core” on a live stream of the Falcon Heavy launch.

As the centre core was only able to relight one of the three engines needed to land, it hit the water at 300 miles per hour and about 300 feet from the drone ship.

SpaceX CEO Elon Musk said in a press call after the rocket launch: “It was enough to take out two thrusters and shower the deck with shrapnel.”

SpaceX had already predicted the centre core was less likely to be salvaged.

Where is the 2008 Tesla roadster now?

After the launch, founder Elon Musk tweeted to say the upper stage of the Falcon Heavy – which carries the Tesla payload – had successfully ignited its engine and raised its orbit as intended.

He later revealed the car had survived the “third burn” and exceed the Mars orbit.

Sharing an image of the rocket’s path, he added the roadster has “kept going to the Asteroid belt”

The projected path of the car would have brought close to Mars, but Mr Musk said there is only an “extremely tiny” chance that it might crash into the planet.

The car was supposed to be circling the sun at the distance of the Mars orbit, but it overshot that path and seems to be in an orbit between Mars and Jupiter.

The map shows how far out the car will travel, going into the asteroid belt instead. If it had stayed on course, it would have drifted through space – potentially for millions of years.

The success of the launch has given billionaire Mr Musk hope for more advancement in the future.

The entrepreneur said: “I can imagine large numbers of those, just coming in and landing, taking off, landing, doing many flights per day.

“I think it gives me a lot of faith for our next architecture, our interplanetary spaceship.”

Mr Musk hopes the launch will spark more innovation across the space industry.

Plants Have Been Keeping a Secret From Us About How Thirsty They Actually Are : ScienceAlert
This Artificial Synapse Can Run a Million Times Faster Than Ones in The Human Brain : ScienceAlert
This Seemingly Simple Foot Feature May’ve Allowed Sauropods to Become Giants : ScienceAlert
Scientists Gave Young Mice The Blood of Old Mice. Then Things Got Weird : ScienceAlert
Clinical Trial Restored Sight to 20 People With Corneas Made From An Unlikely Source : ScienceAlert