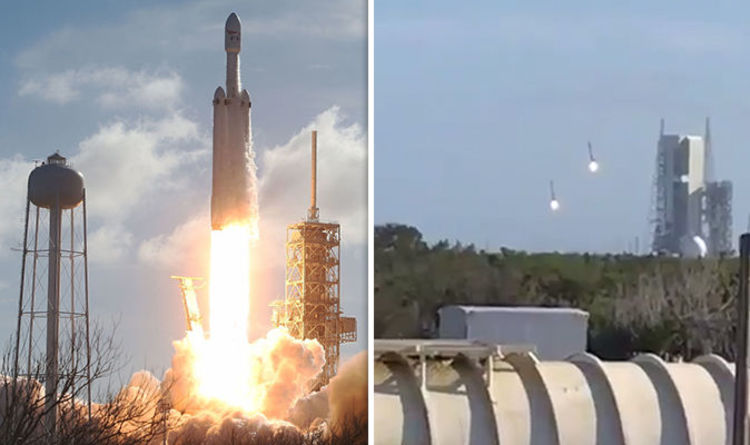 
SpaceX made history yesterday as they launched the powerful Falcon Heavy rocket into space with the founder, Elon Musk’s, Tesla car onboard.

The rocket left Kennedy Space Center in Florida yesterday shortly after 3.45pm EST (8.45pm GMT) with one of the billionaire’s cherry-red electric cars in the payload cargo.

Thousands of people cheered as the Falcon Heavy rocket blasted into space with the Tesla car now barrelling towards Mars.

In the footage, SpaceX’s boosters could be seen returning back to earth and performing a synchronised landing.

The third booster was planned to detach from the rocket and land itself on an autonomous drone ship stationed in the Atlantic Ocean.

As the two boosters returned to Cape Canaveral and landed on twin pads, sonic booms from the Falcon Heavy rocket continuing its journey into space can be heard.

The Falcon 9 boosters touched down and are planned to be used in future missions.

In the successful launch, footage has also appeared of Mr Musk’s Tesla sports car gliding past the Earth on its journey to the Red Planet.

An image of the car heading towards Mars showed the cherry-red sports car displaying a comical message reading “don’t panic” on the dashboard.