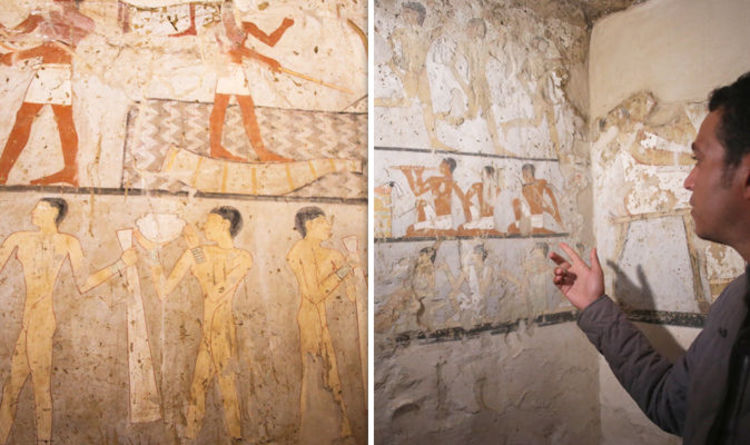 
Mostafa Waziri, one of the archeologists that made the incredible discovery, declared that the tomb was still in “very good condition”.

He explained: “The tomb is in very good condition.

“Such scenes are rare…and have only been found previously in the tomb of Ka-Iber, where a painting shows a monkey dancing in front of a guitarist, not an orchestra.”

One scene on the historical walls shows two monkeys dancing and eating fruit.

Cairo’s Antiques Minister, Khaled al-Enany, declared that the age-old tomb was built for a priestess, named Hetpet, to the goddess of fertility, Hathor.

Mr al-Enany added that the tomb was part of a series of graves that were put together for official figures in the Old Kingdom’s Fifth Dynasty.

Hathor is an Egyptian icon and was worshipped throughout the country – she was the goddess of dance, music and fertility.

The rare discovery was made in the region of Giza, south of the country’s capital.

Mr Waziri labelled the area that housed the tomb as “promising” and stated that he and his team expect to “find more” as their excavations continue.

The splendidly decorated tomb is the first archaeological discovery of the year in Egypt.

The African nation is home to some of the greatest monuments and history in the world, however, tourism has stagnated since the overthrow of leader Hosni Mubarak in 2011.

A Nuclear War Could Starve Billions, But One Country May Be Safer Than The Rest : ScienceAlert
Plants Have Been Keeping a Secret From Us About How Thirsty They Actually Are : ScienceAlert
Researchers in South America Discover a New Species of Tiny but Tough Dinosaurs : ScienceAlert
Thinking Hard and Long Can Cause Brain Drain : ScienceAlert
Robot Shows It’s Possible to Swim Through The Emptiness of a Curved Universe : ScienceAlert