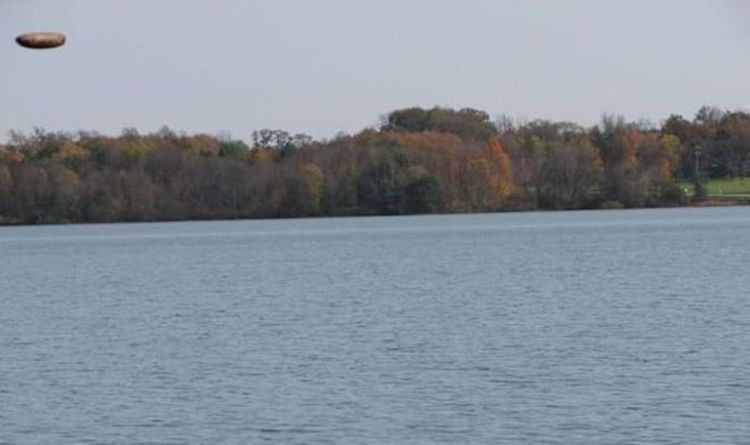 
The picture, taken in Nelson ledges state park in Garrettsville, Nelson, Ohio, USA, has a strange torpedo-shaped object in the top-left corner above a lake and trees.

Investigators at the US-based Mutual UFO Network (MUFON) were sent the image for analysis.

MUFON is the world’s largest organisation dedicated to UFO and alien research and it keeps a global database of sightings, many of which are investigated.

A son of the man, who has not been named by MUFON, sent in the image with a report.

He said in the report: “He was fishing and decided to take a couple pictures for memories.

“He realised later on while looking at the pictures and noticed this odd looking object.

“He says that when he was shooting the pictures he didn’t notice anything strange.

“My guess is whatever it was had to be moving really fast and was caught on film at the right moment.”

The report said the picture was taken on October 23, 2011, but has only just been sent to MUFON which is investigating.

But the organisation has previously admitted that it does get inundated with hoax footage by pranksters and other individuals, which in some cases have to undergo initial assessment, tying up investigators.

The organisation accepts that this is one of the pitfalls of being an organisation dedicated to such research.

MUFON investigator Peter Davenport said on the website: “One of the greatest burdens that UFO investigators have to bear, in the course of their collecting and investigating sighting reports submitted by members of the public, is the deluge of apparently false reports and cases of mistaken identity that have to be waded through, and eliminated from, the stream of incoming data.

“What prompts people to create and submit bogus reports is unclear, save for the apparently widespread lack of self-discipline, and lack of concern for others, that seems all too common in mankind.

“However, the fact remains that such deception takes place constantly, and that it probably will continue in ufology, and elsewhere, until long after we have finally laid to rest the mystery of UFOs.”

He believes it was a genuine picture and not a hoax, but not evidence of aliens.

He said: ” I don’t think it’s a hoax. The sender says his dad was fishing and decided to take a couple pictures for memories.

“He realised later on while looking at the pictures noticed this odd object.

“That object could be something launched in the water during the fish, like a stone.

“It’s hard to identify it but I’d like to see the original picture, not a cropped image.”

Deep-Sea Sponges Can ‘sneeze’ Out Mucus, and The Footage Is Weirdly Mesmerizing : ScienceAlert
A Common ‘Forever Chemical’ Has Just Been Linked to Liver Cancer in Humans : ScienceAlert
This Artificial Synapse Can Run a Million Times Faster Than Ones in The Human Brain : ScienceAlert
New Predictions Reveal The Fate of The World’s Biggest Ice Sheet if We Don’t Act : ScienceAlert
Extreme Drought in Italy Reveals Hidden Bomb Submerged in River Since WWII