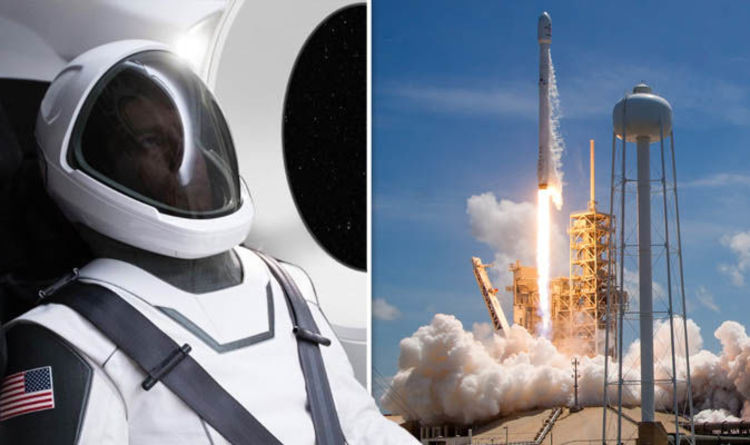 
Although SpaceX is known for its commercial satellite launches, the company aims to pioneer manned missions in the near future.

A top SpaceX executive has now revealed the company is readying to send astronauts to the ISS.

And the manned missions could take place as early as April 2019.

Gwynne Shotwell, SpaceX president, told reporters in Los Angeles a November rocket launch could be the first stepping stone towards the 2019 goal.

The SpaceX chief said: “Predicting launch dates could make a liar out of the best of us.

“I hope I am not proven to be a liar on this one.”

NASA awarded both SpaceX and fellow rocket manufacturer Boeing with contracts in 2014 to bolster the private rocket industry.

The two companies were selected to aid the USA space agency’s commercial crew program, which was set up to develop and fly human space transportations systems.

Earlier this month, NASA proudly named the nine space flight pioneers who will test and fly SpaceX’s and Boeing’s craft later next year.

You can read more about each of the NASA and Boeing astronauts named by NASA here.

Both companies have been directed to blast off astronauts to the ISS from American soil for the first time since NASA pulled the plug on the space shuttle program in 2011.

For the past seven years, NASA has heavily relied on its allies at the Russian space agency Roscosmos and its signature Soyuz spacecraft to reach the ISS.

But at the cost of £62.6million ($80million) for a seat onboard a Soyuz rocket, NASA has looked to cheaper alternatives to man the orbital space laboratory.

The news comes after a Government report published in July concluded SpaceX is unlikely to reach its target of putting astronauts in space by 2019.

But the SpaceX executive remained positive the company will work out a safe way of safely seeing humans to the ISS next year.

Ms Shotwell said: “Next in line we want to make sure not only that we get these folks up and back to safety but that that’s reliable and a mission that we can conclude.

“We want to hit all the boxes and do everything we need to do, to demonstrate that this vehicle is capable of taking astronauts up from US soil as often as NASA will allow us.”

SpaceX plans to send astronauts to the ISS aboard its newly unveiled Crew Dragon module – a potentially seven-seater spacecraft designed for manned missions.

SpaceX teased: “Crew Dragon will be a fully autonomous spacecraft that can also be monitored and controlled by onboard astronauts and SpaceX mission control in Hawthorne, California.”

Similar launch woes follow NASA and SpaceX in their goal to send the first human explorers to the surface of Mars by the end of 2030.

A damning Government review published in July conceded NASA is unlikely to succeed within the given timeframe despite a series of planned launches.

Veteran astronaut Chris Hadfield also said in June he did not think either NASA or its commercial partners would reach the planet in the near future.

The Canadian astronaut who spent 166 days in space said: “I don’t think those are a practical way to send people to Mars because they’re dangerous and it takes too long.”

We Just Got Our Closest View of Europa in 20 Years, And We Can’t Stop Staring : ScienceAlert
Superconductivity Model With 100,000 Equations Now Contains Just 4 Thanks to AI : ScienceAlert
Deep Brain Simulation Could Alleviate OCD When Other Treatments Have Failed : ScienceAlert
Ancient Burial of a Young Girl Shows How We Carried Our Babies 10,000 Years Ago : ScienceAlert
It Turns Out There Is Such a Thing as Good Gossip, According to New Research : ScienceAlert