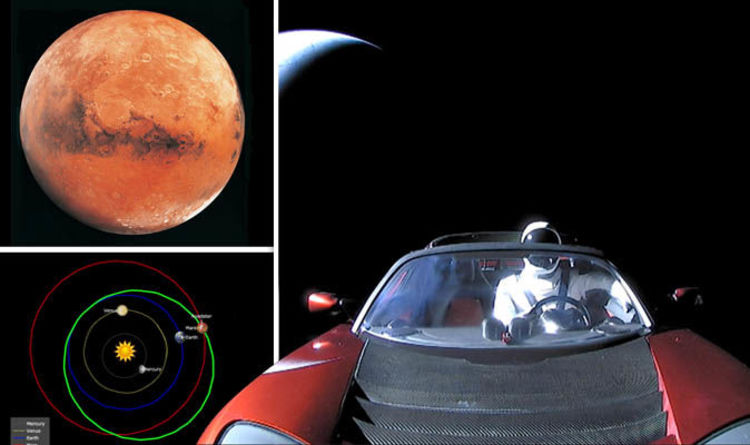 But the despite the unexpected mishap, the sports car and its dummy pilot Starman, are still well on track to eventually intercept the red planet.

And thanks to the help of one die hard SpaceX fan, science boffins around the world can now track the Roadster as it sails across the stars.

According to the WhereIsRoadster.com live tracker, Starman will make his fist close approach to Mars on June 9, 2018, at a distance of 0.74 AU (104.7 million kilometres).

Up until around the end of April, the Roadster and Earth will appear to share a similar orbit before the car slingshots away towards the asteroid belt.

Then sometime mid-July this year, Starman will cross Mars’ orbit, but the two objects will not meet.

But with all of these stellar approaches in the coming years, is SpaceX‘s Starman at risk of crash-landing on Mars, or worse yet on Earth?

Not in millions of years, according to a trio of international scientists who calculated the probability of the Roadster colliding wth the Red Planet.

Hanno Rein, lead author of “The random walk of cars and their collision probabilities with planets” research paper, stressed such a scenario is highly unlikely.

Mr Rein said: “We’ve not seen any single collision with Mars in 240 simulations, though we continue to run them and see what happens.

“The likely outcome is that it will crash, in tens of millions of years, into Earth or Venus or the sun.”

But the odds of this happening are incredibly low – in fact only about 6 percent for Earth and 2.5 percent for Venus.

The three space experts expect Starman to pay a close visit to its home world every 30 years or so.

The next close encounter is scheduled for 2091 at a distance similar to that between the planet and the moon – roughly 384,400 kilometres.