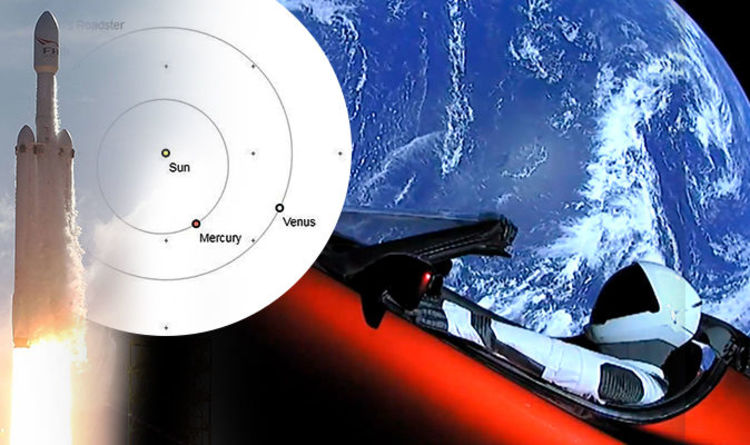 
Elon Musk confirmed late Tuesday the Falcon Heavy and its lone Starman passenger have completed one final engine burn towards a “trans-Mars injection”.

The powerful rocket launched from the Kennedy Space Center in Cape Canaveral, Florida, at 3.45pm EST (8.45pm GMT) on Tuesday before breaking out to into space.

Mr Musk revealed yesterday the final rocket burst worked better than intended and has quite significantly shifted the Roadster’s trajectory.

Last night, he also shared the last photograph of Starman at the wheel of the roadster.

He tweeted: “Last pic of Starman in Roadster enroute to Mars orbit and then the Asteroid Belt.”

But where is Starman right now? Where is the Tesla roadster?

Earth has already had its last glimpse of the Tesla roadster and Starman as they head towards the red planet Mars after completing one final engine burn towards a “trans-Mars injection”.

Sharing an image of the rocket’s path yesterday, SpaceX CEO Elon Musk said the roadster has “kept going to the Asteroid belt”.

The projected path of the car would have brought close to Mars, but Mr Musk said there is only an “extremely tiny” chance that it might crash into the planet.

The car was supposed to be circling the sun at the distance of the Mars orbit, but it overshot that path and seems to be in an orbit between Mars and Jupiter.

On Wednesday, the US Air Force Space Command announced it had added the Tesla Roadster to the US satellite catalogue.

New Predictions Reveal The Fate of The World’s Biggest Ice Sheet if We Don’t Act : ScienceAlert
Extreme Drought in Italy Reveals Hidden Bomb Submerged in River Since WWII
Minor Google Meltdown Exposes The World’s Utter Reliance on a Single Tech Company
This Artificial Synapse Can Run a Million Times Faster Than Ones in The Human Brain : ScienceAlert
An Experimental Surgical Robot Is Headed to The International Space Station