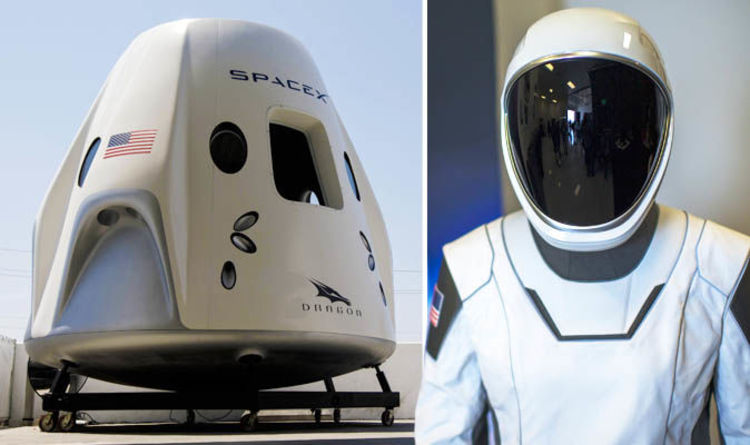 
The Crew Dragon module is the SpaceX’s manned module, designed to send NASA astronauts to the International Space Station (ISS).

But once complete, SpaceX’s module will be the first commercial spacecraft to blast off from American soil with NASA astronauts on board.

SpaceX president and COO Gwynne Shotwell told reporters on Monday the private rocket manufacturer aims to prove its mettle with the Crew Dragon in the coming months.

Ms Shotwell said: “We are not going to fly until we’re ready to fly these folks safely.”

A test model of the Crew Dragon was presented to members of the media at SpaceX’s headquarters in Hawthorne, California, on Monday, August 13.

The mockup model gives a good idea of what the completed spacecraft should look like by the end of the year.

The sleek-looking interior of the Crew Dragon can hosts up to seven astronauts blasting off into space but will only hold four NASA crew members when making the 253-mile-long trip to the ISS.

The cockpit features an overhead control panel and four round windows for the astronauts to watch the Blue Planet shrink below them at a rapid pace.

During the SpaceX demonstration, the company showed off its Crew Dragon simulator where astronauts test the spacecraft’s systems before using the real thing.

A stripped down version of the Crew Dragon was also put on display in SpaceX’s so-called clean room.

The empty metal husk is seen lined with all sorts of wiring and equipment crucial to the spacecraft’s survival in space.

Four of the astronauts who will one day fly the Crew Dragon were at hand to speak about the opportunity to take part in the historic launch.

Mr Hurley said: “Being able to fly the first flight of a vehicle as a test pilot is a once-a-generational type of opportunity.

“But I would also say that we have a lot of work left to do, and we are in it for the long haul to make this vehicle as great as possible for our friends back in the astronaut office, that maybe haven’t even gotten hired yet, but they’re going to fly on this vehicle someday.

“We take that job very seriously.”

At a separate part of the of the demonstration, SpaceX presented a mock-up control panel from the cockpit simulator.

Are Technica’s Eric Berger, who had the chance to see the simulator up close, noted a big EJECT handle in the middle of the console.

He said: “One control stood out—a large black and red handle in the middle of the console with EJECT printed in clear white letters above it.

“This initiates the launch escape system, which rapidly pulls the spacecraft away from the rocket in the case of an emergency during the ascent into space. It must be pulled, then twisted.

“Normally the flight computers would initiate such a manoeuvre, but the prominence of the escape system handle underlines its importance.”

SpaceX hopes to test the Crew Dragon without a manned crew in November before the NASA astronauts carry out a manned test flight ahead of the April launch date.

Ms Shotwell said: “Predicting launch dates could make a liar out of the best of us. I hope I am not proven to be a liar on this one.”

The Frogs Vanished, Then People Got Sick. This Was No Harmless Coincidence. : ScienceAlert
Why House Fly Barf Is an Overlooked Potential Vector of Disease : ScienceAlert
This Is How Much Fossil Fuel The World Is Sitting on, And It’s a Time Bomb : ScienceAlert
Scientists Are About to Fire Up The Most Powerful Laser in The US : ScienceAlert
A New FRB Signal Has Buzzed Nearly 2,000 Times in Just Two Months, Raising a Mystery : ScienceAlert