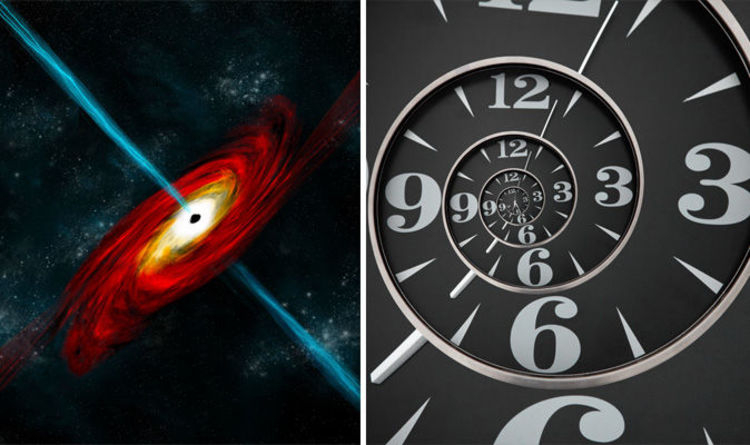 
Black holes are formed when stars collapse in on themselves resulting in one of the most intense explosions in the universe.

As the stars implode, they release gamma ray bursts – or GRBs – which are huge bursts of energy that are released and can travel vast distances through the Universe.

However, scientists may have discovered something even more mesmerising than black holes and GRBs: the possibility of time reversing in the surrounding areas just as they go off.

Researchers from the College of Charleston found that time essentially “mirrored” itself in wavelike structures in six GRBs which they studied.

The study found that a cluster of electrons and ions ‘emissions’ which were spat out during a GRB seemed to repeat backwards as the signal reflected through the cloud of material from the explosion of a star.

The College of Charleston researchers wrote in their paper published in arXiv: “The existence of time-reversed pulse structure leads us to believe that physical models of GRB pulses must contain strong physical symmetries and an interaction with a single impactor.

While the research may sound incredible it is not totally unexpected as black holes and time often have a complicated relationship.

This is an effect known as time dilation.

The gravitational pull around a black hole is so intense that even light cannot escape its grasp.

Gravity effects light so as the light is sucked back in to the black hole, time slows down to the point which it stops.

So, for example, a ticking clock falling into a black hole would tick slower and slower until it stops and would take an infinite amount of time to reach the black hole.