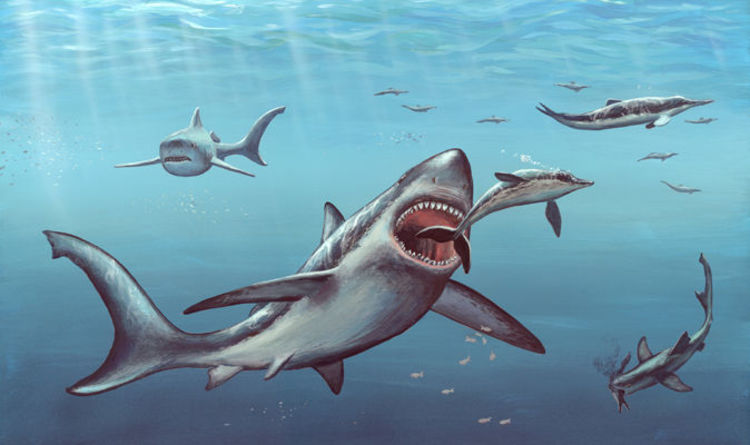 
Megalodons measured 75 feet and were three times bigger than the oceans current apex predator and its distant relative the great white shark.

The giant beast, whose name means big tooth with a mouth full of 270 teeth, was thought to have gone extinct three million years ago following a drop off in the food chain.

But some suggest that the megalodon – which is the subject of the new move The Meg starring Jason Statham – is still lurking deep in the water.

There have been numerous apparent sightings of the massive shark and some suggest it could still live in the Mariana Trench – the deepest point of the ocean and one of the remaining places on Earth which has yet to be explored.

According to website Exemplore: “While it may be true that Megalodon lives in the upper part of the water column over the Mariana Trench, it probably has no reason to hide in its depths.

“There’s no food for it down there, and no other shark species are known to thrive that deep.

“Of course it’s also possible there is another piece of the puzzle not yet considered.

“If Megalodon has managed to remain hidden from modern science, isn’t it also possible that another large unknown animal lives in the ocean depths as well?

“If a large, unknown prey item lives in the Mariana Trench, is it possible Megalodon followed it down.”

However, scientists have dismissed this idea and state that it is extremely unlikely that the megalodon still lives.

The curator of vertebrate paleobiology at the Smithsonian Institution’s National Museum of Natural History in Washington, Hans Sues, said there is “no way” it still exists.

He said: “That would be absolutely impossible and goes against everything we know about megalodons based on the fossil record.

“We’ve mapped the seafloor and have such advanced sensing technology. We would know if they were there.”

Engineers Gave a Car a Pair of Eyes to Make Future Roads Safer For Pedestrians : ScienceAlert
Early Puberty in Girls Surged in The Pandemic, And We May Finally Know Why : ScienceAlert
Termites Love Global Warming So Much That They May Make It Worse, Says Study : ScienceAlert
Scientists Are About to Fire Up The Most Powerful Laser in The US : ScienceAlert
JWST’s First Glimpse of Mars Reveals The Red Planet in a New Light : ScienceAlert