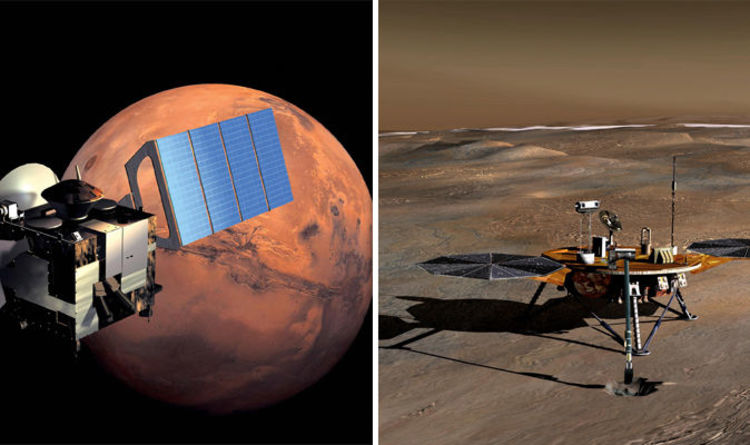 
The “ghost dunes” are hundreds of crescent-shaped depression on the surface of Mars, which once used to be sand dunes the size of Big Ben’s Elizabeth Tower in Westminster.

The ancient formations remained preserved due to their composition, which consists of lava or sediments, researchers explained in the new study published in the Journal of geophysical Research: Planets.

Lead author Mackenzie Day, a planetary geomorphologist at the University of Washington in Seattle, said: “We know that dunes on Earth can support life, and dunes on Earth are very similar to dunes on Mars.

“One problem that Mars has that Earth doesn’t is the surface radiation.

“If you are inside a dune, or at the bottom of a dune, and you are microbial life, the dune is protecting you from a lot of that radiation.”

Ms Day added: “There is probably nothing living there now.

“But if there ever was anything on Mars, this is a better place than average to look.”

The phenomenal structures have been seen on Earth and in satellite images of various regions on Mars: the Hellas basin and Noctis Labyrinthus.

In addition to providing a useful target in the hunt for signatures of ancient life, the dunes may also help to shape our understanding of what Martian winds were like in the past.

According to leading author Ms Day, shedding some light on the winds of the past can also help researchers reconstruct how sediments could have traveled over the surface, how the major features of the planet formed and if the ancient climate was any different from the modern one.

Ms Day said: “One of the cool things about the ghost dunes is that they tell us, for sure, that the wind on Mars was different in the ancient past, when they formed.

“The fact that the wind was different tells us that the environmental conditions on Mars aren’t static over long time scales, they have changed over the past couple billion years, something we need to know to interpret the geology on Mars.”

“They are all going the same way, which you would expect for dunes because they are all migrating and forming in the same wind regime.

“So just the shape and size tell us that these are features that are coming from an ancient dune system.”

A Stunning New 3D Model of The Cat’s Eye Nebula May Help Us Solve Its Mysteries : ScienceAlert
Experiment Reveals What 1 Hour in Nature Does to The Human Brain : ScienceAlert
The Real Reason For Using Flight Mode Is Not What You Think : ScienceAlert
One of The World’s Largest Organisms Is Disintegrating. Here’s How We Might Save It. : ScienceAlert
Wolves Really Can Become Attached to Humans Like Dogs Can, Adorable Study Finds : ScienceAlert