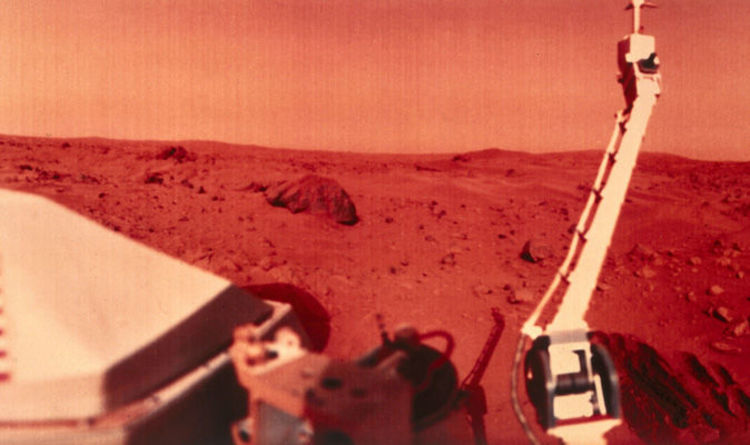 The space agency’s Viking Landers were the first probes ever to land on the Martian surface over the course of a 10-month period from 1975 to 1976.

The new study, published in the Journal of Geophysical Research: Planets suggests that Viking 1 and 2 may have destroyed the raw materials for life using their gas instruments.

The landers were built to last 90 days – but ended up collecting data on Mars for more than six years, including 4,500 iconic pictures of the Martian surface.

However evidence of organics was conspicuous by its absence, and scientists had to wait until last month, NASA announced that its Curiosity Rover had discovered organic molecules – the so-called “building blocks of life” – buried in an ancient labelled.

Back in the 1970s, scientists were baffled because it was well-known that Mars had been regularly pelted with carbon-rich meteorites, meaning the Viking mission should have had little trouble detecting organic molecules at the time.

Study author Chris McKay, a planetary scientist at NASA’s Ames Research Centre, told New Scientist: “It was just completely unexpected and inconsistent with what we knew.”

The investigation deduced that in order to test the soil, Viking 1 and 2 would have used gas instruments to heat samples so that they released vapours which could then be studied closely for to see if they contained organic material.

Mr McKay’s team concluded that in the process of doing this, they would have burned up a flammable salt contained within the Martian soil called perchlorate, the presence of which was confirmed by one of Viking’s successor’s the Phoenix lander, in 2008.

It then emerged that the Curiosity Rover had also found chlorobenzene, created when carbon molecules burn with perchlorate, on Mars, further strengthening their hypothesis.

Going through the records, researchers discovered that the Viking probes had also detected chlorobenzene, suggesting this was the result of soil samples being burned by the landers.

They concluded that the probes DID find organic material – but that it was destroyed before it could be analysed.

Mr McKay’s conclusions were not universally acknowledged however – Melissa Guzman, based at the LATMOS research centre in France, who also worked on the paper, argued that the chlorobenzene found by the landers could have from material carried from Earth to Mars.

However, Dr Daniel Glavin, of NASA’s Goddard Space Flight Centre in Maryland, was satisfied that the paper proved the Viking mission found organics in the soil of Mars.

Dr Glavin, who was not involved in writing the research, said: “This paper really seals the deal.”

More answers are in the pipeline, with several missions due to touch down on Mars in the coming years, including the InSight lander later this year, and the European Space Agency’s ExoMars 2020 mission in two years’ time.

There’s Trouble Bubbling Up in Newly Formed Alaskan Lakes, And Scientists Are Worried : ScienceAlert
We Have Our First Look at Neptune’s Rings in 33 Years, And They’re Glorious : ScienceAlert
Experiment Reveals What 1 Hour in Nature Does to The Human Brain : ScienceAlert
How Many Ants Live on Earth? Scientists Came Up With an Answer : ScienceAlert
A Weird Blob of Hot Gas Is Whizzing Around Sagittarius A* With ‘Mind-Blowing Velocity’ : ScienceAlert