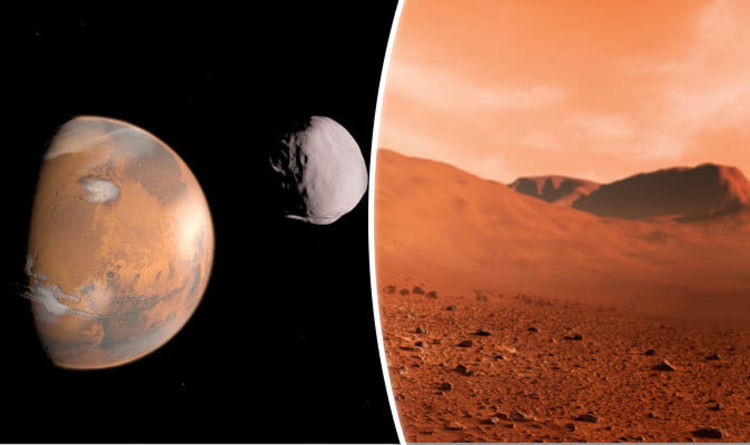 
Scientists are less concerned with the effect on Mars than on her two moons Phobos and Deimos which are seen as initial stepping off points for a full landing.

Phobos and Deimos have become targets for manned landings which would allow easier control of machines on the Martian surface.

However, new research shows the moons act like cosmic rechargeable batteries – with solar winds building up charges of up to 10,000 volts.

The two small moons have no atmosphere and are directly exposed to the solar wind – a stream of electrically conducting gas, called plasma, which is constantly blowing off the surface of the Sun into space at around a million miles per hour.

This plasma may be responsible for a building up significant electrical charges in both astronauts and rovers and other electronic equipment.

The team’s calculations revealed that this static charge can reach 10,000 volts in some materials, like the Teflon suits used in the Apollo lunar missions.

If the astronaut then touches something conductive, like a piece of equipment, this could release the charge, possibly similar to the discharge you get when you shuffle across a carpet and touch a metal door handle.

William Farrell, lead author of the study from NASA’s Goddard Space Flight Center, said: “We found that astronauts or rovers could accumulate significant electric charges when traversing the night side of Phobos — the side facing Mars during the Martian day.

“While we don’t expect these charges to be large enough to injure an astronaut, they are potentially large enough to affect sensitive equipment, so we would need to design spacesuits and equipment that minimizes any charging hazard.”

The working hypothesis is that astronauts would travel to Phobos and remotely operate robots on the Martian surface, reducing the considerable time delay faced by Earth-based operators.

NASA has considered Phobos as a possible initial base because its weak gravity makes it easier to land spacecraft, astronauts and supplies, according to the statement.