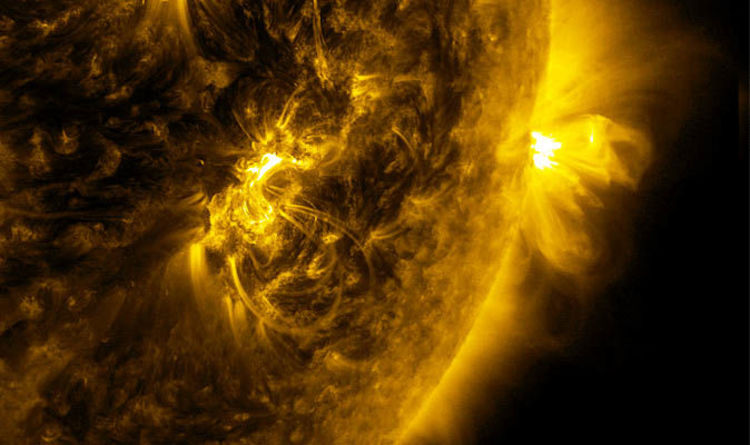 The disastrous effects solar storms have on the planet were last seen in September 2017, at the height of the Atlantic hurricane season.

The powerful blasts of solar energy struck after the US NOAA Space Weather Prediction Center warned of radio blackouts on the dayside of Earth.

The flares cut off communications at a crucial time of need, putting people caught in hurricanes at a greater risk of danger.

The new study showed the solar flares had an impact on shortwave radios which were heavily employed by amateur rescue teams and dispatch operators.

The study, penned by lead author Rob Redmon of NOAA, reads: “The September 6 X9.3 flare was the largest to date for the nearly concluded solar cycle 24 and, in fact, the brightest recorded since an X17 flare in September 2005, which occurred during the declining phase of solar cycle 23.

Another major solar flare erupted from the Sun just days later on September 10, causing a radio blackout for about three hours.


The September 6 X9.3 flare was the largest to date

Both blackouts occurred during the highly destructive Category 5 Hurricane Irma and Category 4 Hurricane Jose wreaking havoc in the Caribbean.

“if I head on over to my amateur radio operator, and they have been transmitting messages for me, whether it be for moving equipment or finding people or just saying I’m okay to somebody else, suddenly I can’t do that on this day, and that would be pretty stressful.”

The 2017 solar flares were the largest of their kind in more than a decade.

Each flare released powerful bursts of x-rays from the Sun which interacted with the Earth’s atmosphere between 30 to 600 miles above ground.

Strong geomagnetic storms triggered by the Sun’s unpredictable outbursts, depending on their intensity, have the potential to disrupt power grids, GPS systems, spacecraft, satellites and communications systems.

Solar flare outbursts can last anywhere between minutes to hours. 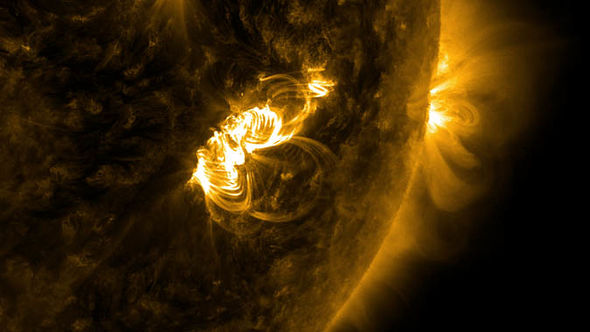 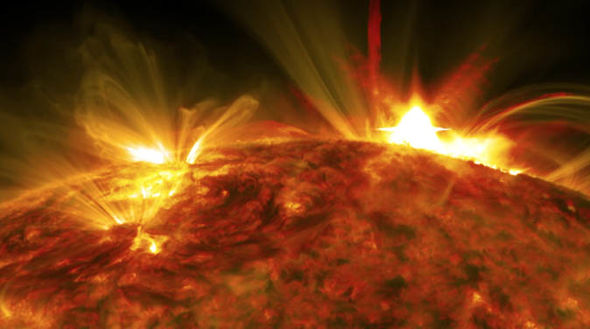 NOAA explained: “The sudden outburst of electromagnetic energy travels at the speed of light, therefore any effect upon the sunlit side of Earth’s exposed outer atmosphere occurs at the same time the event is observed.

“The increased level of X-ray and extreme ultraviolet (EUV) radiation results in ionization in the lower layers of the ionosphere on the sunlit side of Earth.”

Radio blackouts caused by solar flares are characterised on a five-level scale – from “R1 Minor” to “R5 Extreme”.

Extreme storms cause maritime navigations systems to experience outages for many hours and cause increased errors in satellite positioning.

The geomagnetic storm warnings issued on September 9, 2017, were ranked “G4 Severe” on the NOAA scales.

Hubble And Webb Pics Reveal DART Impact Was Even Bigger Than Expected : ScienceAlert
Secret Clues in Tutankhamun’s Tomb Reignite The Idea That Nefertiti Is Hidden Nearby : ScienceAlert
Shimmering ‘Lakes’ Under The South Pole of Mars Might Be Something Else Entirely : ScienceAlert
A Rare Condition Makes Hair Truly Untamable, All Thanks to These Genes : ScienceAlert
Experts Estimate The Scale of The Nord Stream Pipelines Methane Leak : ScienceAlert