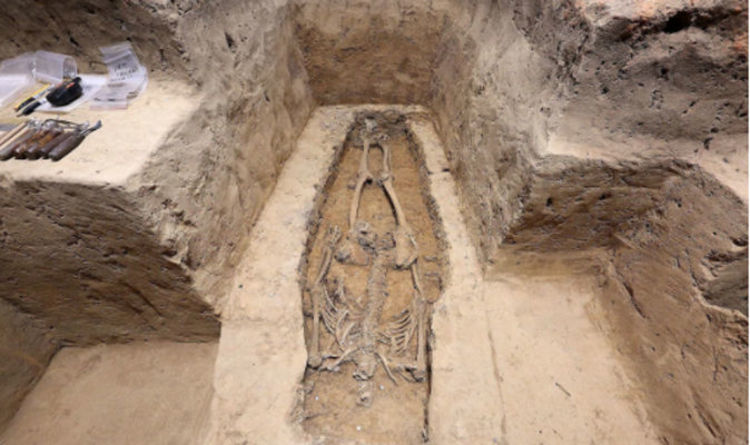 
Briton Sir George is regarded as the saviour of Jamestown – the first British colony in America.

When he arrived in 1609, the colony was in ruins and such was the dire situation of the remaining people there – those who had not starved or been killed by the native Americans – had resorted to cannibalism.

However, Sir George turned the situation around by implementing new laws based on the English judicial system and established the Virginia Assembly, the first representative government in America.

Archaeologists excavating the area now believe they have found the remains of Sir George and have brought in Dr Turi King of Leicester University to confirm their belief.

The skeleton was found in the central aisle of a church and it is believed to be 39-years old when he died – the same age Sir George was.

Prof King said: “It’s a tremendous honour to be involved in the project and hopefully to help identify the putative remains of Sir George Yeardley.

“Jamestown is one of the most famous archaeological sites in US history and Yeardley oversaw the first representative Virginia General Assembly. It’s considered to be the birthplace of American democracy.

“Just as in the King Richard III case, I hope to extract DNA from the remains and match against living relatives as part of the evidence to identify these being the remains of one of the founding fathers of American democracy.”

The grave was aligned with the church’s foundation, which suggests it was dug before the building was demolished in 1639 – 12 years after Sir George’s death.

The team will now look for living descendants of Sir George so they can compare DNA.

Prof Kevin Schurer, from Leicester University, said: “Searching for particular relatives who inherited certain DNA types over many generations is always a challenge, but I hope that we can track down the necessary present-day distant relatives.

“Sir George Yeardley was a central figure in the development of what was to become the United States of America and so should we be able to positively identify the skeleton, this would be a tremendous achievement”.

JWST’s First Glimpse of Mars Reveals The Red Planet in a New Light : ScienceAlert
A Stunning New 3D Model of The Cat’s Eye Nebula May Help Us Solve Its Mysteries : ScienceAlert
Scientists Don’t Know What to Do With This Weird ‘Blue Goo’ Ocean Organism : ScienceAlert
There Are New FDA Safety Warnings About Breast Implants. Here’s What We Know : ScienceAlert
Does IQ Decline as We Age? One Type of Intelligence Peaks in Your Twenties : ScienceAlert