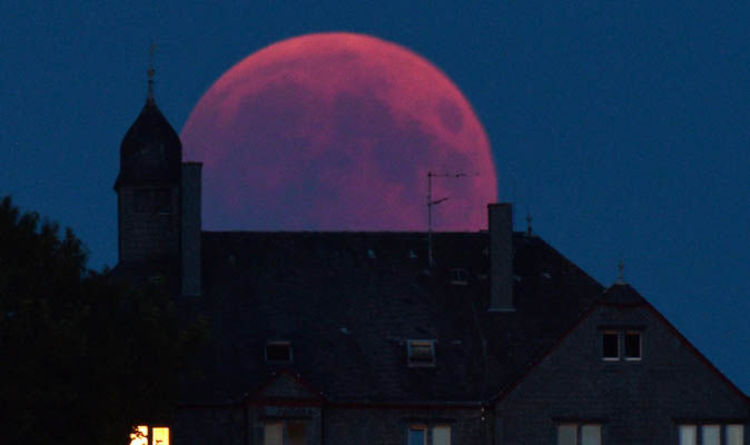 The total lunar eclipse broke out in the nightside of Earth on the night of Friday, July 27.

Stargazers in the Eastern Hemisphere watched in awe as the full Moon crossed paths with the Earth’s shadow and took on a deep red hue.

The lunar spectacle was touted as the longest Blood Moon eclipse of the 21st century, clocking in at one hour and 43 minutes.

This longer-than-usual period of totality created the perfect opportunity for astrophotographers and amateur astronomers alike to snap pictures of the ominous red glow.

As the Blood Moon seemingly sailed across the night skies to the west, the Moon was snapped over a variety of incredible landmarks and iconic monuments.

Most photographers who went hunting for the Moon, shot it using large telephoto lenses from a considerable distance, giving the Moon a colossal appearance.

The first incredible picture of the Moon was snapped in Strasbourg, eastern France, juxtaposed against the “Woman walking in the sky” – an 80-foot -all sculpture created by American artist Jonathan Borofsky.

The Blood Moon was photographed lined up perfectly with the climbing woman as if she was reaching up to snatch the glowing orb on her way to the skies. 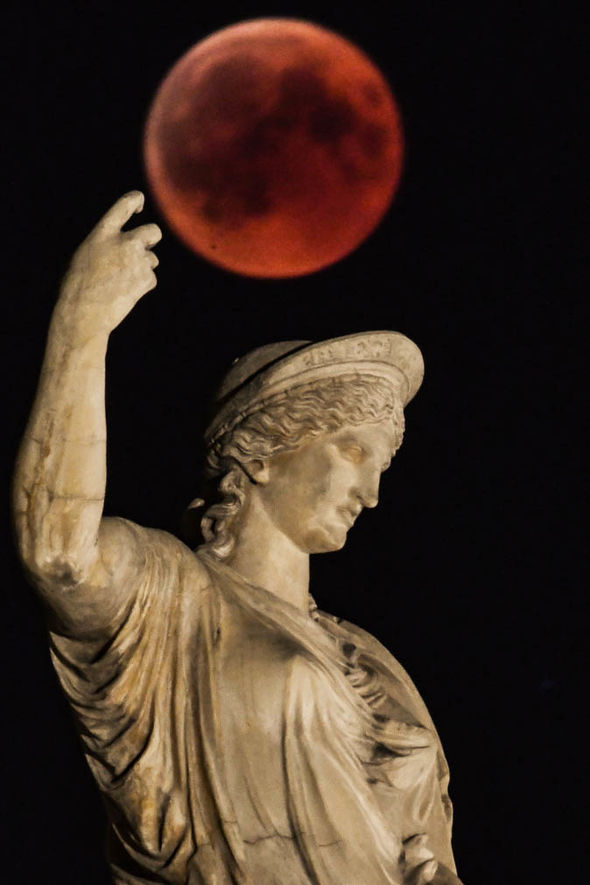 Eclipse 2018: A photographer took photos of the Blood Moon with the Greek pantheon (Image: GETTY)

The next Blood Moon photo was taken in Greece and it appears to show a statue of the ancient Greek goddess Hera holding the Blood Moon.

The incredible photo was snapped in Central Athens alongside numerous other posed photos with the entire Greek pantheon.

The other pictures in the set show the god of war Ares, the goddess Irine and the god Apollo all reaching out for the Blood Moon.

Elsewhere the Blood Moon eclipse was pictured rising over the picturesque Chambord Castle in Chambord, France. 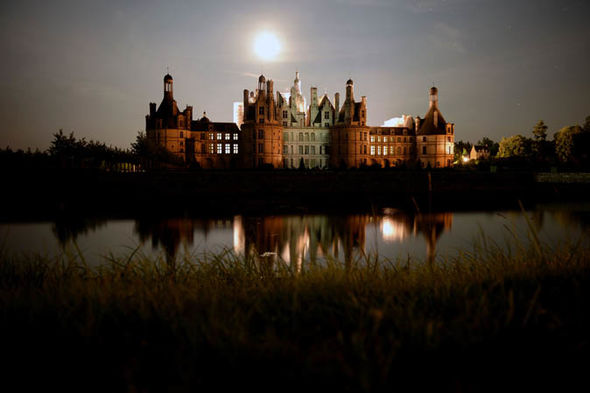 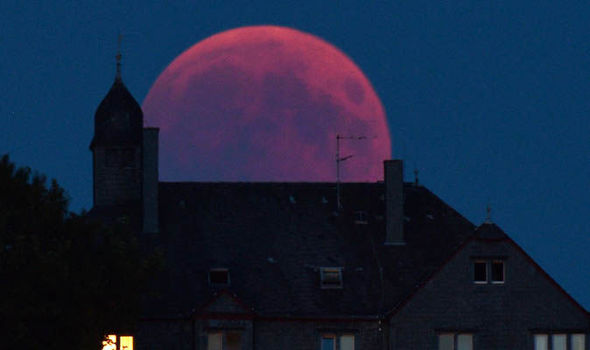 The historic Château de Chambord is one of the most distinct French Renaissance-era buildings, recognised worldwide for its numerous turrets, tall windows and sprawling grounds.

The Blood Moon was photographed illuminating the impressive structure in the dead of night.

In Germany, one photographer managed to make the deep-red Moon look monstrously large, by juxtaposing it against the silhouette of a hostel in Bernkastel-Kues.

The effect was achieved by focusing on the Moon from a considerable distance with the aid of a very long lens.

In Srinagar, India, the July full moon eclipse was snapped in between a bed of pink and white flowers.

India was one of the countries in Central Asia best positioned to see the Blood Moon eclipse thanks to this year’s path of totality.

The Moon crossed the Earth’s shadow over Central Asia and Eastern Africa this month, with outlying areas witnessing the eclipse either at moonrise or sunrise.

One lucky photographer in Calabro, Italy, snapped the moment the Earth’s shadow bit into the Moon over a group of seemingly unaware fishermen on a beach. 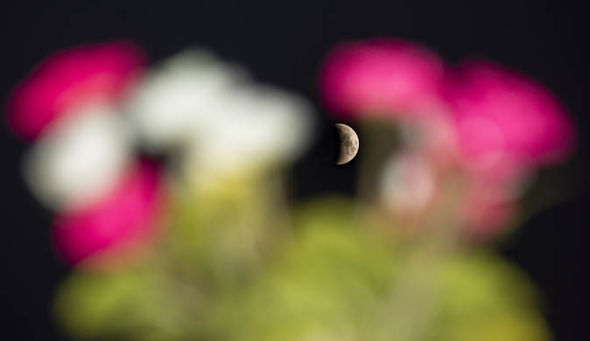 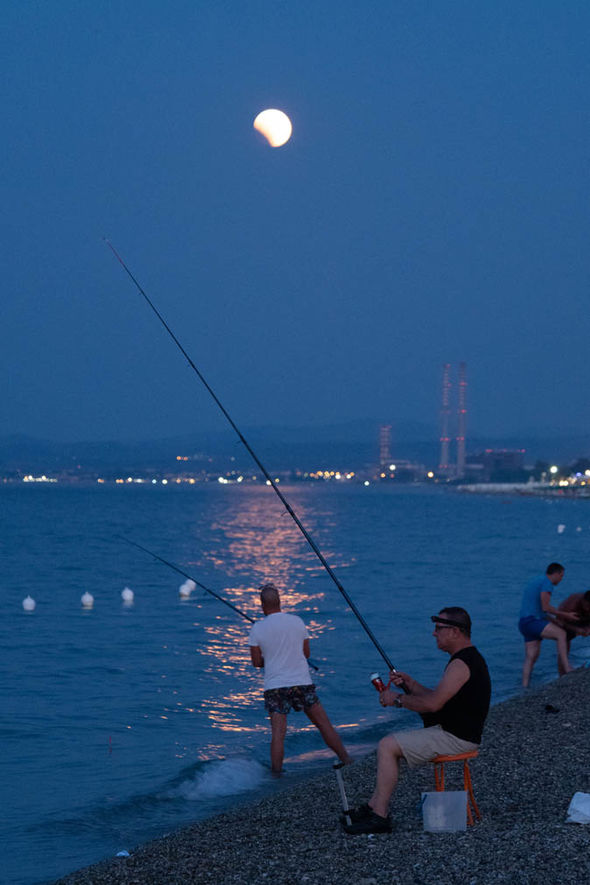 Eclipse 2018: A group of fishermen in Italy underneath the incredible Blood Moon (Image: GETTY) 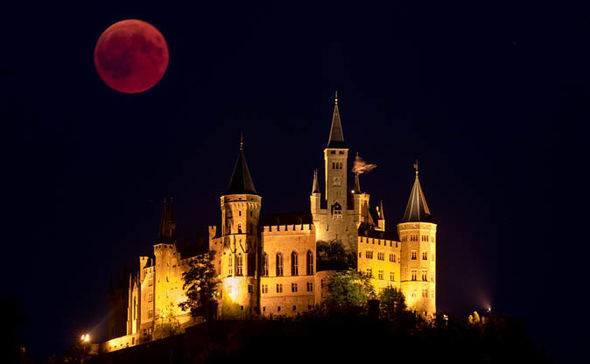 Eclipse 2018: This sinister photo of the Blood Moon was snapped in Germany (Image: GETTY)

The brilliant full Moon sits high in the sky in the photo, brightly illuminating the Ionian sea and fishermen below it.

A particularly sinister picture of the Blood Moon was taken over the fairytale-like Hohenzollern Castle, in Heichingen, Germany.

The castle is the ancestral home of the Prussian Royal House and the Hohenzollern Princes on the periphery of the Swabian Alb in Germany.

The presence of the deeply coloured Blood Moon peaking over the castle’s steep spires gives the picture an incredibly suspenseful and magical feeling. 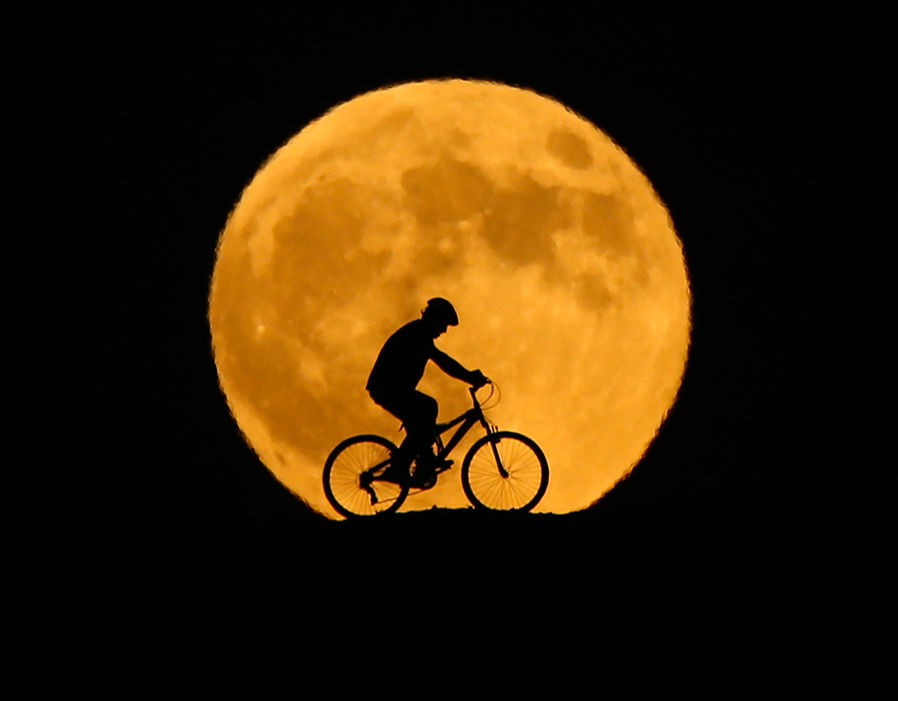 The full moon rises behind a cyclist’s silhouette in Van, Turkey

Unfortunately, in some places around the world, the Blood Moon was either not present or was completely obscured from sight by poor weather conditions.

In the UK, a last-minute deluge choked out the skies with thick cloud cover and thunderstorms, causing thousands of stargazers across the country to cry out in frustration.

One social media user, @EddieD94, tweeted: “Apparently the best lunar eclipse in 60 plus years coincides with the first time London is cloudy tonight for the past few weeks. Typical UK. Disappointing to the end.”

Another person, @Jamilly121, shared a photo of the cloudy skies with the caption: “As ever a truly stunning view of the lunar eclipse in London, UK.”