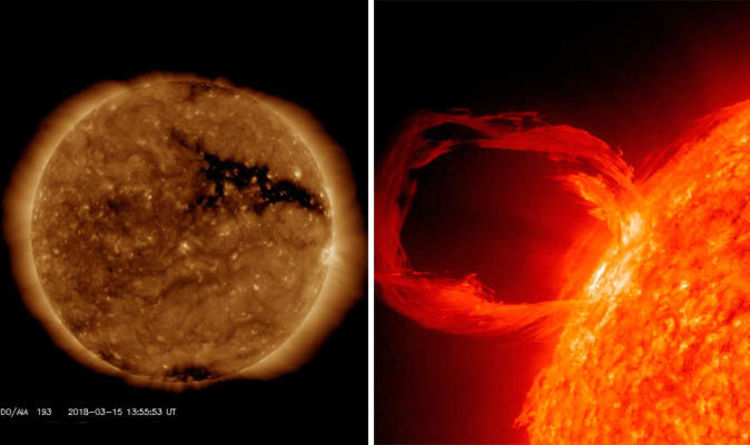 
A minor G1 geomagnetic storm watch is in effect today for the entire planet, scientists have warned.

The storm watch came into effect on Tuesday night, after astronomers noticed a rip in the surface of the sun.

The “canyon-like” hole was picked up on NASA’s Solar Dynamic Observatory (SDO) satellites.

On Wednesday March 14 the US space agency said the sun was showing a “coronal hole” ejecting high-speed plasma towards Earth.

Coronal holes appear on the sun’s surface whenever the star’s magnetic field opens up to relate intense charged particles and solar winds.

Scientists now expect the storm to create stunning aurora effects in the northern hemisphere, but has also warned of potential power outages.

The US Space Weather Prediction Center (SWPC) said a storm of this scale can lead to weak power grid fluctuations, minor impact on satellite operations and even disorientate migratory animals.

The latest SWPC storm maps shows the most likely extent of the aurora effect tonight.

The aurora path will trail through the northernmost parts of Scotland, parts of the US and South Canada and through large swathes of Siberia.

Between 12.57pm and 1.35pm GMT there is a relatively low chance of Northern Lights developing in polar regions and northern Canada.

Northern Lights phenomena occur during solar storms because charged particles from the sun excite oxygen and nitrogen particles in the atmosphere.

BBC weatherman Matt Taylor explained: “The sun is of course not a solid object – fluctuations on that, solar flares off that, so that sends highly charged particles right through the atmosphere towards us.

This stellar interplay of particles paints the sky in various hues of red, green, yellow, blue and purple depending on the air’s composition.

This Species of Carnivorous Plant Evolved Into a Toilet And Is Now Winning at Life : ScienceAlert
Scientists Have a Plan to Turn Earth Into a Giant Observatory : ScienceAlert
Major Blow as Experimental HIV Vaccine Fails in Late Clinical Trial : ScienceAlert
This Rembrandt Has Been Hiding a Surprising Secret For Centuries : ScienceAlert
Dogs Can Be Aggressive For Lots of Reasons, And One of Them Is You : ScienceAlert