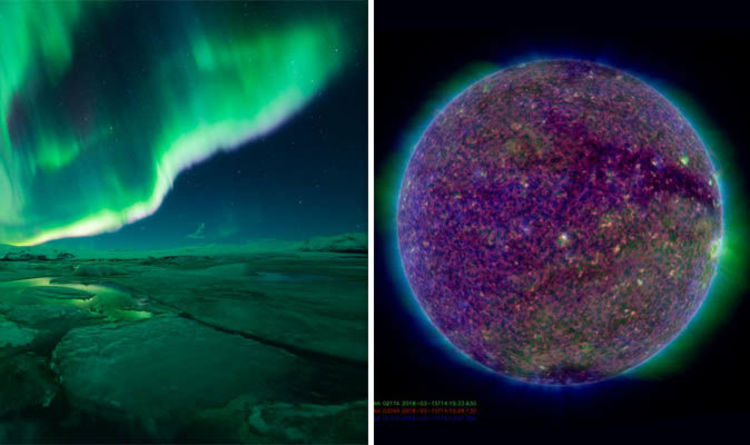 
A massive gash in the sun’s surface opened this week, releasing wave after wave of charged particles and solar winds straight at Earth.

Scientists have now warned of a minor G1 geomagnetic storm watch in effect through Thursday, March 15.

The US Space Weather Prediction Center (SWPC) said the storm could result in minor power outages and satellite disruptions tonight.

But as the solar storm washes over the upper hemisphere, the true impact of the solar wind will be seen in night skies.

The space weather forecaster expects a stunning display of dancing lights to paint the skies tonight in the Northern Hemisphere.

An Aurora Extent map published by the SWPC shows the most likely path taken by the Northern lights.

The most optimal aurora path moves through the northernmost parts of Scotland, central Russia, USA and parts of southern Canada.

At the moment there is a low chance of the Aurora Borealis developing in the polar regions and northern Canada.

According to the SpaceWeatherLive tracker, the geomagnetic conditions needed to hit the aurora threshold were reached just before midnight last night.

Geomagnetic conditions are now marked ‘active’, however the tracker noted “current data suggest that it is not possible to see aurora now at middle latitudes”.

SpaceWeatherLive said on Wednesday: “What to expect today and tomorrow are possible enhanced auroral displays which with a bit of luck might be visible from locations like northern England, southern Scandinavia, the US/Canadian border and southern New Zealand/Tasmania.”

But why is the solar storm triggering the Northern Lights tonight?

The Northern Lights, or Aurora Borealis, occurs whenever charged particles from the sun interact with oxygen and nitrogen particles in polar regions.

The charged particles excite oxygen and nitrogens to create a stunning display of glowing lights drifting across the night sky.

BBC weatherman Matt Taylor explained: “The sun is of course not a solid object – fluctuations on that, solar flares off that, so that sends highly charged particles right through the atmosphere towards us.