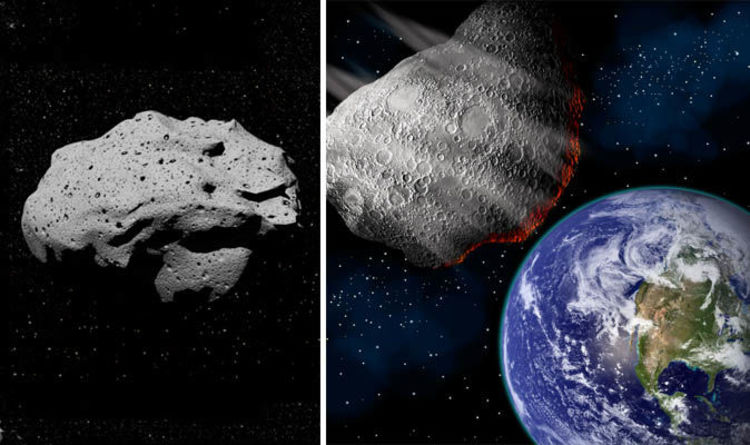 
Asteroid EB4 is creeping ever closer to the unaware planet with every passing second, threatening a close orbital approach as the asteroid rushes towards Earth at breakneck of nearly 13kms or more than 29,000mph.

Scientists estimate the monstrous asteroid ranges anywhere from 21 to 52-metres in diameter.

The latest orbital data collected by NASA shows EB4 is on a path which will skim past Earth in the early morning hours of Friday, March 16.

According to NASA’s close approach data, EB4 will arrive around 5.59am UTC.

EB4 is expected to pass the planet within 1.5 lunar distances or 577,500.9 km. This means the asteroid will approach almost as close as the moon.

Thankfully there appears to be no threat of immediate danger and the asteroid will swing past Earth without contact.

In fact EB4 has a rating of -5.94 on NASA’s Palermo Technical Impact Hazard Scale. Palermo Scales below -2 indicate events with “no likely consequences”.

EB4 has not even made it onto NASA’s list of Potentially Hazardous Asteroids (PHAs).

The US space agency explained: “Potentially Hazardous Asteroids (PHAs) are currently defined based on parameters that measure the asteroid’s potential to make threatening close approaches to the Earth.

“Specifically, all asteroids with an Earth Minimum Orbit Intersection Distance (MOID) of 0.05 au or less and an absolute magnitude (H) of 22.0 or less are considered PHAs.

The reality of the matter is that these asteroid approaches are actually very common and hundreds of tonnes of space debris crash into Earth every single day.

In fact between now and the end of March another seven notable asteroids will swing by the planet.

Thereafter another nine asteroids will zoom past Earth in May.

NASA said: “Every day, Earth is bombarded with more than 100 tons of dust and sand-sized particles.

“Only once every few million years, an object large enough to threaten Earth’s civilisation comes along. Impact craters on Earth, the moon and other planetary bodies are evidence of these occurrences.”

The next asteroid to fly by Earth is Asteroid 2018 EC1, which will show up on Sunday March 18, within 4.4 lunar distances.

Orcas Are Contaminated With a Forever Chemical Associated With an Unlikely Product : ScienceAlert
More Life Than We Ever Realized Could Survive in The Deep Dark of The Ocean : ScienceAlert
Incredible ‘Fairy’ Robot Sails on The Breeze Like a Floating Dandelion : ScienceAlert
Human Brain Organoids Transplanted Into Rats Just Passed a Major Milestone : ScienceAlert
A Planet Almost Exactly Earth’s Size Has Been Found 72 Light-Years Away : ScienceAlert