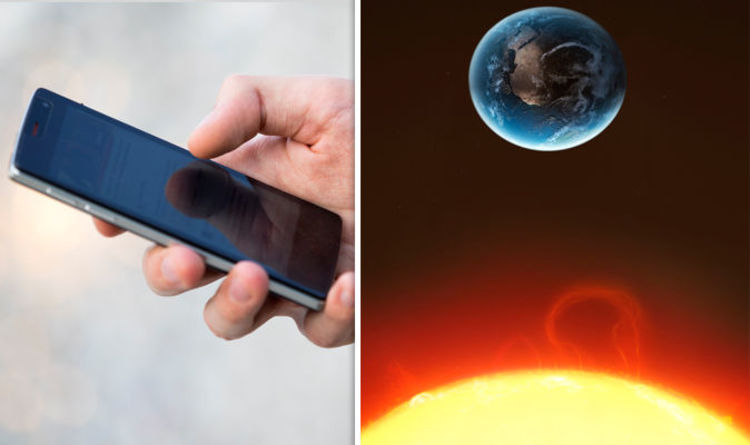 
Forecasts from the US National Oceanic and Atmospheric Administration (NOAA) say that there is a 55 percent chance that a solar storm will envelop Earth sometimes today.

The cosmic rays are flowing from a huge gap in the sun’s ‘atmosphere’, called a coronal hole, which is releasing a huge amount of particles.

As it stands, the NOAA says the forecast for the impending solar storm is G-1 or ‘minor’.

However, this could be updated to a G-2, or moderate storm, depending on how the charged particles from the sun hit Earth.

A statement on Space Weather said: “NOAA forecasters say there is a 55% chance of G1-class geomagnetic storms on March 15th when a stream of solar wind is expected to engulf our planet.

“The gaseous material is flowing from a wide gash in the sun’s atmosphere, now facing Earth.”

The solar storm will hit the northern hemisphere, which could lead to the Northern Lights, or aurora borealis, being seen as far south as the upper reaches of Scotland.

But the consequences could be far more serious than the appearance of the Northern Lights.

When magnetic field lines travel from the interior of the Sun to its surface, they usually remain inside our star.

Study of 500,000 Medical Records Links Viruses to Alzheimer’s Again And Again : ScienceAlert
Hypertension Drug Shown to Extend Lifespan And Slow Aging in Animals : ScienceAlert
JWST Has Found Life’s Elemental Building Blocks in The Depths of Darkest Space : ScienceAlert
There’s a ‘Lost City’ Deep in The Ocean, And It’s Unlike Anything We’ve Ever Seen : ScienceAlert
Babies May Not Be Born With a Microbiome After All, Scientists Say : ScienceAlert