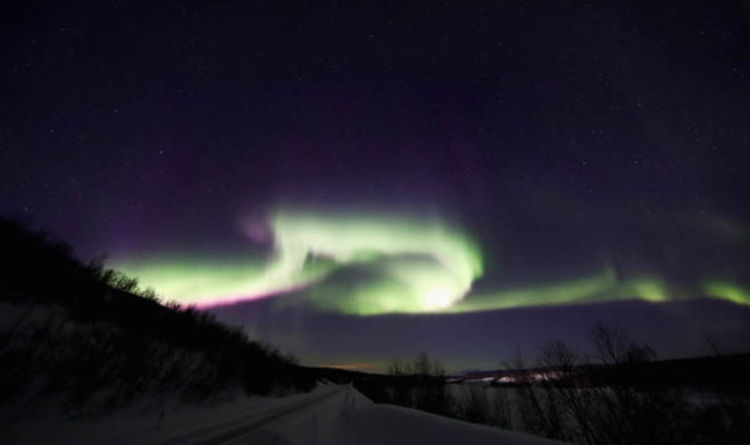 
Will you be able to see the Aurora Borealis?

A solar storm has heightened the Earth’s auroras this week and a minor solar storm is still in effect tonight, which will result in increased magnetosphere activity.

This mean the Aurora Borealis, also known as the Northern Lights, will be visible in the northern hemisphere.

The US National Oceanic and Atmospheric Administration (NOAA) said: “A G1 minor geomagnetic watch remains in effect for 15 March, 2018 UTC as the influence from enhanced solar wind parameters persists.”

The NOAA said the primary impact area is everywhere above 60 degrees latitude.

It is possible the storm could be visible in parts of northern England Ireland, and may extend further south if it is stronger than predicted.

The Space Weather Prediction Centre has suggested we might see a KP5 tonight.

The KP index is the scale used to measure geomagnetic storms and it ranges from 0 (very little activity) to 9 (lots of activity) and the larger the number, the further south the lights can be seen.

Alistair McLean, managing director of The Aurora Zone said: “This time of year does coincide with the equinox, which is often associated with higher levels of solar activity.

“The Space Weather Prediction Centre is suggested that we might see a KP5 tonight.”

What is the weather forecast tonight?

The forecast for tonight according to the Met Office is wet and windy weather, and snow in Scotland, which do not present the best conditions to view the northern lights.

The Met Office said: “Wet and windy weather will continue in the northeast, with snow accumulations starting across eastern Scottish hills.

“Elsewhere will be cloudy, windy and generally mild, with some showery rain.”

Experts have recommended for the best chance to see the Northern lights you need to look out for “clear, dark skies free of light pollution”.

Daniel Billett, a PhD student in Space and Planetary Physics at Lancaster University told Sky news: “For the best possible chance to see the aurora, look out for clear, dark skies free of light pollution. Northward facing coastline and high up rural areas tend to be good spots for aurora spotting.”

Astronomers Find What May Be a Habitable World 31 Light-Years Away : ScienceAlert
A Splash of Milk in Coffee May Have Health Benefits We Didn’t Know About : ScienceAlert
Bigfoot Has a Very Simple Explanation, Scientist Says : ScienceAlert
How a Dead Girl in Paris Wound Up With The Most-Kissed Lips in All of History : ScienceAlert
Scientists Discover a Weird New Form of Ice That May Change How We Think About Water : ScienceAlert