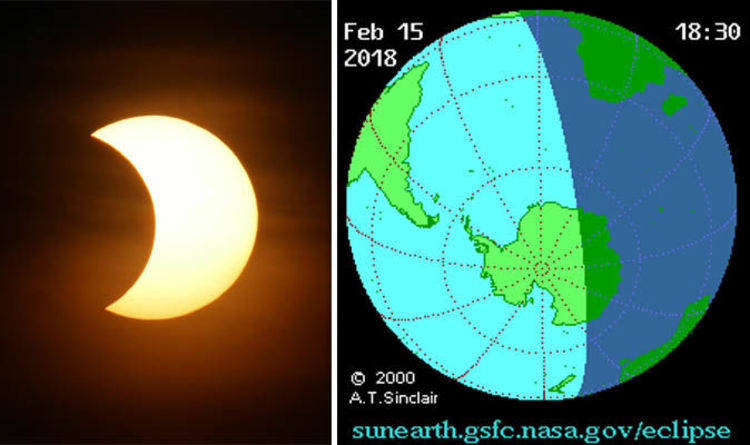 
Astronomy enthusiasts have impatiently waited for the next solar eclipse since the skies went dark over the US several months ago in August.

However unlike the magnificent August 21 total eclipse, today’s event is limited in both its scope and reach.

Eclipse naturally occur whenever the moon aligns with the sun to block out its warmth and sunlight.

According to NASA there are four stint types of eclipses, and tonight’s is a partial eclipse of the sun.

The American space agency said: “A partial eclipse occurs when the moon passes in front of the sun, off centre and only a portion of the sun’s disk is obscured.”

The unfortunate news for space boffins across the globe is that the eclipse is limited to the southernmost parts below the equator.

But millions of people are still in the sun’s path and you are however in look in you live anywhere in the southern tip of South America.

The partial eclipse will begin tonight over Antarctica, near the south pole, before heading out towards Uruguay, Argentina, Chile and parts of Brazil and Paraguay.

The residents of Buenos Aries in Argentina and Montevideo in Uruguay are poised to capture the best views of the eclipse.

Elsewhere viewers run the risk of missing out on the action.

Ernie Wright, a programmer at NASA’s Goddard Space Flight Center, said: “For most people, this is a really marginal event.

“If you didn’t know it was happening, you wouldn’t even notice it.”

The path taken by the eclipse can be seen on the map below, generated by NASA’s Goddard Space Flight Center.

The eclipse will stretch out from the Pacific Ocean, west of Antarctica all the over to Argentina and Uruguay.

What time will the solar eclipse 2018 rise?

The moon will begin to eclipse the sun over Antarctica sometime between 8pm and 9pm GMT tonight.

Towards the end of the eclipse, Mr Wright said the eclipse will show up over Buenos Aires around 6.36pm local time.

The eclipse will reach its mid-point soon after around 7.13pm.

NASA officially marked the start of eclipse season on February 10, and for good reason, because there are two more eclipses lined up this.

The space agency said: “The spring eclipse season began on February 10 with a partial eclipse and concludes March 5, 2018.”

The next eclipse will take place on July 13 and August 11.

Alarming Spread of Bird Flu Continues as More Species Infected : ScienceAlert
What Can They Actually See? : ScienceAlert
Human Brain Organoids Transplanted Into Rats Just Passed a Major Milestone : ScienceAlert
How a Dead Girl in Paris Wound Up With The Most-Kissed Lips in All of History : ScienceAlert
Incredible ‘Fairy’ Robot Sails on The Breeze Like a Floating Dandelion : ScienceAlert