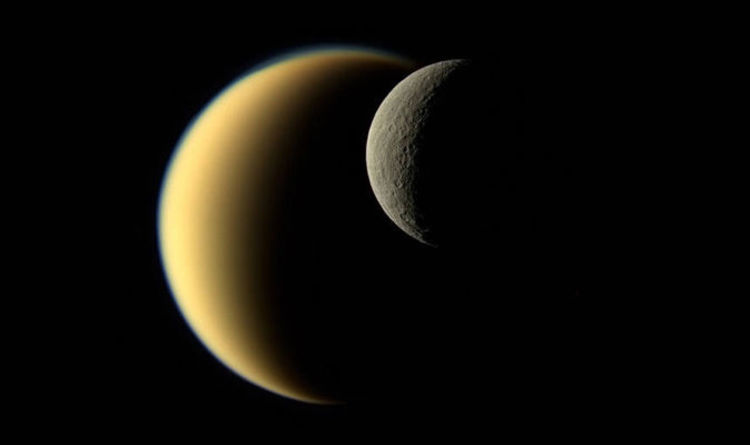 
On 15 September, 2017, Cassini completed a 20-year mission by driving into Saturn’s atmosphere, exploding upon entry.

However, five months later, historic and unprecedented images are still being trickled out to the public from the historic mission, and this may be one of the most stunning yet.

The image from NASA shows the moon Rhea passing in front of Titan – the largest two of Saturn’s 62 moons.

NASA snapped the image on Cassini’s narrow-angle camera in 2009, but only released the photograph on February 5.

Although the two celestial bodies look like they are close to each other, they are actually separated by 713,300 miles – the Earth and the Moon are 238,900 miles from each other on average.

The Cassini mission is deemed as one of the most successful space probes to date as the likes of NASA gained unprecedented views and new information on Saturn.

The spacecraft was launched in 1997 but did not arrive at the ringed planet until 12 years ago.

NASA decided to obliterate Cassini because of fears the spacecraft could collide with one of Saturn’s moons if left to drift around space. This may have an effect on any possible life elsewhere in the solar system.

NASA said: “In order to avoid the unlikely possibility of Cassini someday colliding with one of these moons, NASA has chosen to safely dispose of the spacecraft in the atmosphere of Saturn.

“This will ensure that Cassini cannot contaminate any future studies of habitability and potential life on those moons.”