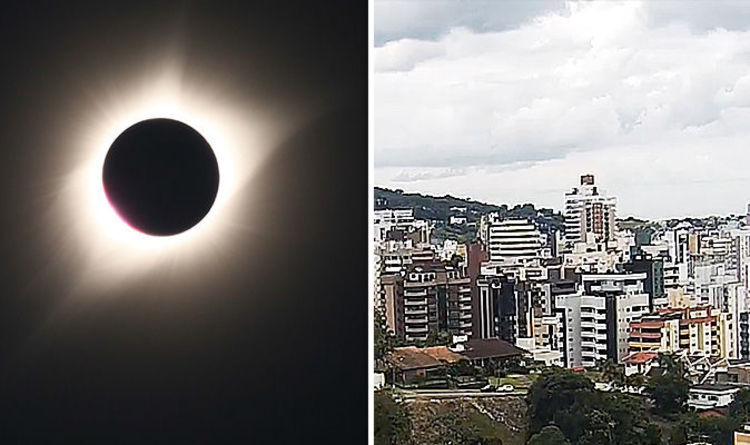 
The partial solar eclipse is expected to be visible in the three Brazilian states of Santa Caterina, Rio Grande and Paraná in addition to several other areas across South America and Antarctica.

Unlike the breathtaking total solar eclipse of August 21, 2017, the eclipse today (February 15) will only partially cover the sun from sight.

A solar eclipse occurs whenever the moon passes directly in front of the sun, blocking out its light for minutes at a time.

Live footage from the city of Criciúma in Santa Caterina state will give viewers worldwide the chance to experience the spectacular phenomenon.

Astronomy boffins in Uruguay, Argentina, Chile and parts of Brazil and Paraguay stand the best chance of spotting the event for about two hours starting at 6:30 pm GMT.

The eclipse is expected to pass over two major cities, Buenos Aries in Argentina and Montevideo in Uruguay.

Unfortunately even if you live in any of these areas you will be hard pressed to spot much, according to Ernie Wright, a programmer at NASA’s Goddard Space Flight Center.

Mr Wright said: “For most people, this is a really marginal event.  If you didn’t know it was happening, you wouldn’t even notice it.”

According to NASA, the solar eclipse will begin its course in the Pacific Ocean, south of Australia and west of Antarctica.

The eclipse will then move east to darken the skies of the southern tip of South America.

This new year is truly chock-full of eclipses and in fact February 10 marked the start of eclipse season for NASA’s Solar Dynamics Observatory (SDO).

The next solar eclipse of the season will take place on July and August 11.

The August eclipse will be visible over large swathes of Europe.

Scans of Mummified ‘Golden Boy’ Reveal He Was Covered in Magical Protections : ScienceAlert
This Species of Carnivorous Plant Evolved Into a Toilet And Is Now Winning at Life : ScienceAlert
Dozens in 7,000 Year Old Mass Grave Were Carefully Decapitated After Death : ScienceAlert
Mysterious ‘Zone of Uncertainty’ Inside The Brain Reveals a Surprise : ScienceAlert
Dogs Can Be Aggressive For Lots of Reasons, And One of Them Is You : ScienceAlert