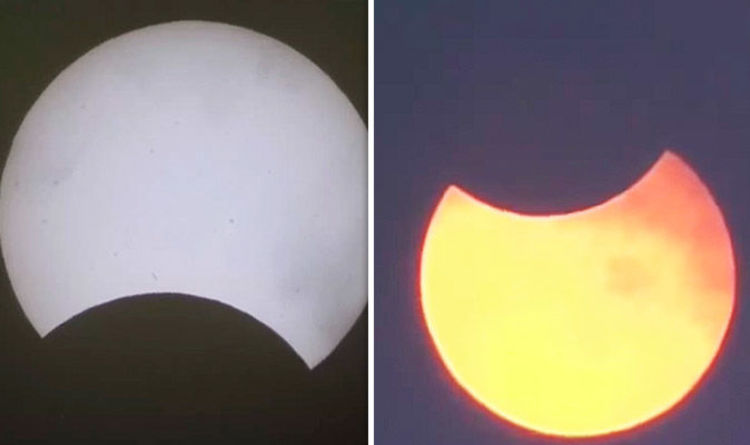 
The partial solar eclipse was visible from Antarctica and a region of southern South America.

A partial eclipse happens when the moon only blocks a portion of the sun.

NASA said: “A partial eclipse occurs when the moon passes in front of the sun, off centre and only a portion of the sun’s disk is obscured.”

The partial solar eclipse started at 6:55 pm on February 5, when the silhouette of the moon started moving across the sun.

It reached its deepest point at 8:51 pm and ended by 10.50 pm and for observers in South America and Antarctica, the sun was very low to the horizon and close to setting in the local sky.

This new year is truly chock-full of eclipses and in fact, February 10 marked the start of eclipse season for NASA’s Solar Dynamics Observatory (SDO).

The next solar eclipse of the season will take place on July and August 11.

The August eclipse will be visible over large swathes of Europe.

Skywatchers in North America will have to wait until April 8, 2024, for the next major solar eclipse.

In 2018, there will be two more partial eclipses, one on July 13 which will be visible from southern Australia and another on August 11 which will be seen from northern Europe and northeast Asia.

One Simple Idea Makes It Much Easier to Manage Your Weight Over Time : ScienceAlert
There’s a ‘Lost City’ Deep in The Ocean, And It’s Unlike Anything We’ve Ever Seen : ScienceAlert
Major Blow as Experimental HIV Vaccine Fails in Late Clinical Trial : ScienceAlert
Physicists Break Record Firing a Laser Down Their University Corridor : ScienceAlert
Bacteria Can Use Plastic Waste as a Food Source, Which Isn’t as Good as It Sounds : ScienceAlert