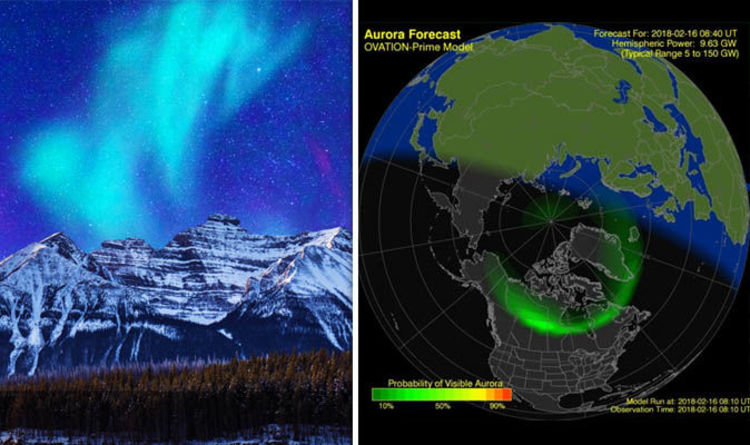 
A powerful solar storm erupting from the heart of the solar system triggered last night one of the most beautiful spectacles of nature.

The Aurora Borealis as seen in the Northern Hemisphere, is a rare occurrence caused by the dance of electrically charged particles in the atmosphere.

The interplay of plasma released above the magnetic north pole leads to various hues of green, blue, yellow, red and violet to paint the sky.

Last night was the first time since November 2017 that Briton were given the chance to see the swirling lights in person, and it could be a long time before we witness them again.

Will the Northern Lights be visible tonight?

Unfortunately the latest Aurora outlook is not looking good for the UK and the rest of Europe.

According to the hourly Aurora Service forecast, the Northern Lights are currently soaring above the northern reaches of Canada and Greenland.

Locals living int he northernmost parts of Norway, Sweden and Finland might stand a minimal chance of seeing the lights as well.

Geomagnetic activity tracked by a team of scientists at Lancaster University’s Department of Physics, indicates the lights peaked last night around 6pm.

Activity has since been in the lower levels but has not completely dropped off.

Nathan Case, a physicist and AuroraWatch UK volunteer, said the residents of northern Scotland stood a “family good chance” of seeing the lights on Thursday.

Mr Case advised that the lights would be best seen between 9pm and midnight, and urged all skygazers to stay on the lookout for clear skies.

What are the Northern Lights?

The Aurora Borealis is the interplay of charged particles ejected from the sun being thrust into the atmosphere by solar winds.

When the particles begin to interact with Earth’s natural magnetic field, they start to have an interesting effect on the gases we breath everyday.

Mr Taylor explained: “The sun is of course not a solid object – fluctuations on that, solar flares off that, so that sends highly charged particles right through the atmosphere towards us.

But the phenomenon is not just limited to Earth and scientists have recorded Aurora effects on the distant world of Saturn.

Hypertension Drug Shown to Extend Lifespan And Slow Aging in Animals : ScienceAlert
People Who Don’t Exist Look More Real Than Actual People, Study Finds : ScienceAlert
There’s a ‘Lost City’ Deep in The Ocean, And It’s Unlike Anything We’ve Ever Seen : ScienceAlert
Dogs Can Be Aggressive For Lots of Reasons, And One of Them Is You : ScienceAlert
Intriguing Meteorite From Mars Reveals ‘Huge Organic Diversity’, Scientists Say : ScienceAlert