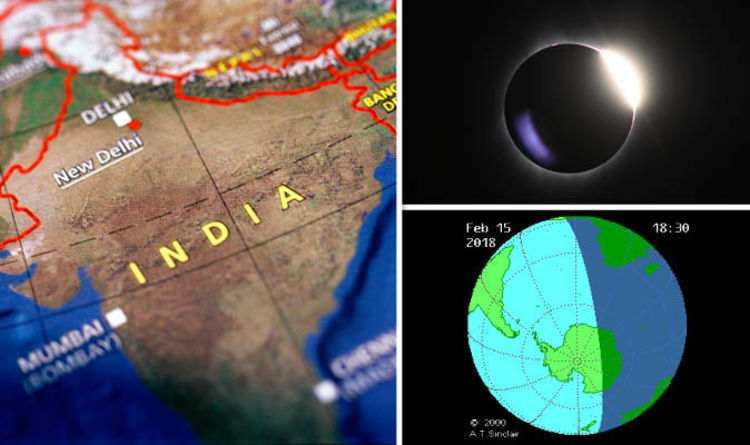 
The moon will briefly cross paths with the sun later this evening, to bite out a shadowy chunk of the solar disc.

Skygazers are particularly excited for this stellar treat because it is the first of its kind since the August 21, 2017, total solar eclipse.

And there is ample reason to be excited for today’s spectacle because it is the first of three partial eclipses to show up in 2018.

Will the partial solar eclipse be visible in India?

Unfortunately skygazers are disappointed to know the eclipse is limited today to a small portion of the planet south of the equator.

Not even the people of Europe, the US or Africa will witness it tonight.

Instead the eclipse will slowly move over Antarctica near the south pole, before appearing over the lower half of South America.

A Space.com report said: “The partial solar eclipse of February 2018 will be magnitude 0.599, meaning that the moon’s face will reach across that fraction of the sun’s diameter.

“Unfortunately for most people, the point of greatest eclipse — where the largest percentage of the sun’s face will appear to be covered — will be on the coast of Antarctica, east of the Antarctic Peninsula.

“The central path of the eclipse will run from a point a few miles east of Asunción, Paraguay, southeast through Argentina and Uruguay and out into the South Atlantic before hitting the Antarctic coast and passing through the frozen continent until it reaches the Indian Ocean south of Tasmania, where it ends.”

Audiences in Montevideo, Uruguay, and Buenos Aires, Argentina, will be treated to the best views.

The eclipse will rise over Antarctica between 8pm and 9pm GMT, before moving east.

Space.com said: “Viewers in the southern part of South America will see a partial eclipse — one that covers less of the sun than at the point of greatest eclipse in Antarctica.

“Viewers in Montevideo, Uruguay, for example, will see an eclipse of magnitude 0.181, for a maximum of 8.8 percent of the sun’s face covered, and in Buenos Aires, Argentina, it will be magnitude 0.165, or about 7.7 percent coverage.

“The inhabited area with the best view of the eclipse will be Stanley, Falkland Islands, where a magnitude-0.398 eclipse will occur, meaning 28 percent of the sun will be obscured by the moon.”

When is the next solar eclipse over India?

The next partial eclipse will rise on July 13, followed by one on August 11.

Unfortunately the next solar eclipse to pass over India is not scheduled until the very end of December 2019.

But a total lunar eclipse between July 27 and 28 this year will cover large swathes of East Africa, the Middle East and the Indian subcontinent.

Bar Graphs Induce a Hidden Bias in Interpretation, Experiment Shows : ScienceAlert
A Lost Interview With The ‘Father of The Big Bang’ Was Just Discovered : ScienceAlert
More Life Than We Ever Realized Could Survive in The Deep Dark of The Ocean : ScienceAlert
Super-Rare Star System Is a Giant Cosmic Accident Waiting to Happen : ScienceAlert
JWST Has Accidentally Detected a Tiny Asteroid ‘Hidden’ Between Mars And Jupiter : ScienceAlert