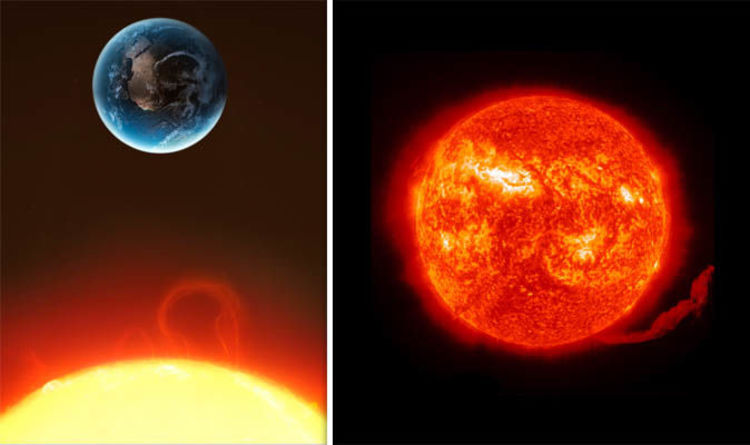 The burst of high-energy radiation and charged particles is now washing over Earth and could lead to electronics being disrupted.

“When CMEs impact the Earth’s magnetosphere, they are responsible for geomagnetic storms and enhanced aurora.”

The National Oceanic and Atmospheric Administration (NOAA) has also warned of a “minor” storm of charged particles hitting the planet, with the possibility of upgrading the forecast later.

According to space forecaster Dr Tamitha Skov, the storm is already here.

She tweeted: “Agreed! Our #solarstorm has finally arrived!

“The energetic particles hint that things may continue to ramp up a bit more so the #solarstorm may intensify and get very interesting over the next few hours.

The solar storm comes off the back of residents in South America preparing to witness a spectacular partial lunar eclipse tonight.

The eclipse will be visible over large swathes of Antarctica and the southernmost countries in South America, where the moon will bite into the sun.

But the “marginal” event could very well be overshadowed by the effects of the storm.

Ernie Wright, a programmer at NASA’s Goddard Space Flight Center, said: “For most people, this is a really marginal event.

“If you didn’t know it was happening, you wouldn’t even notice it.”

Scientists have warned that the solar discharge could lead to disruptions in power grids and interfere with satellite signals.

But the storm could also magnify the effects and visibility of mesmerising auroras in the night sky.

NASA studies into the matter have also bizarrely found that intense solar radiation can dumfound animals by confusing their internal compass.

Fortunately the Earth’s atmosphere and magnetic field are well suited to protect the planet from any real harm.

Newly Discovered Fossil Reveals Hundreds of Teeth ‘Never Seen Before in a Pterosaur’ : ScienceAlert
Sword Mistaken For Replica Is Actually An Ancient 3,000-Year-Old Weapon : ScienceAlert
People Who Don’t Exist Look More Real Than Actual People, Study Finds : ScienceAlert
This Species of Carnivorous Plant Evolved Into a Toilet And Is Now Winning at Life : ScienceAlert
This Physicist Says Electrons Spin in Quantum Physics After All. Here’s Why : ScienceAlert