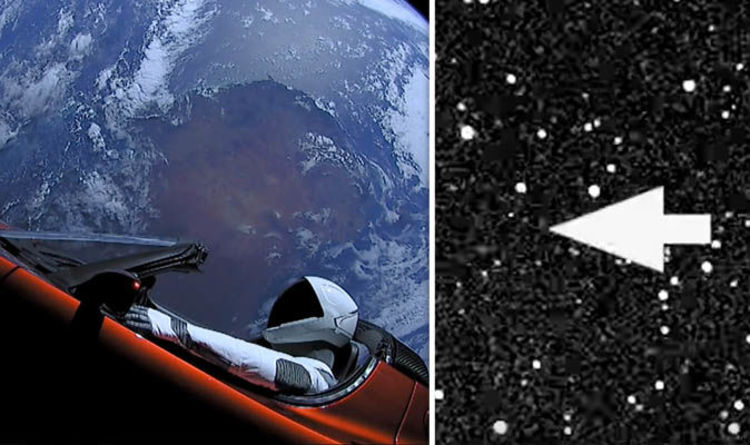 
The little grey dot meandering against the dark, cold expanse of space is none other than the cherry-red Tesla Roadster.

The electric car and its dummy pilot, endearingly named Starman by the South African billionaire, blasted off from Cape Canaveral, Florida, on February 6.

Starman and his highly unusual spacecraft have now been found and photographed thanks to eagle-eyed astrophotographer Rogelio Bernal Andreo.

The California-based astronomer wrote on his website: “I spent a big part of February 8 trying to find the Roadster’s ephemeris, that is, a list indicating the coordinates of the spacecraft over time.

“Luckily, NASA‘s Jet Propulsion Lab, which produces ephemerides for thousands of celestial objects, had just added the roadster to their list, designated 2018-017A.”

SpaceX launched the car into a billion year Mars orbit less than two weeks ago, leaving Mr Andreo with the arduous task of finding it among the millions of stars dotting the sky.

But the seemingly impossible feat was enough to entice him to snap a photo of the roaster or “better yet, a video – of it.”

From a dark vantage point on his doorstep, the Monte Bello Open Space Preserve in California, the astronomer packed an impressive array of powerful cameras and auto-guided twin telescopes.

With the help of NASA’s Jet Propulsion Laboratory (JPL) ephemeris calculator, Mr Andreo was able to plot Starman’s position and trajectory with pinpoint precision – or so it seemed.

Despite working out exactly when and where the SpaceX Roadster would show up, his video shot just after 2am PT (10pm GMT) showed no sign of the car.

Mr Andreo said: “There was absolutely nothing there.”

It was only the next day that the astrophotographer has his eureka moment and figured out where he’d had gone wrong on the night of the shoot.

He explained: “After a quick nap, I go back to all my shots but find nothing, still puzzled about the whole thing. Then it hit me!

“When I created the ephemeris from the JPL’s website, I did not enter my coordinates!! I went with the default, whatever that might be! Since the Roadster is still fairly close to us, parallax is significant, meaning, different locations on Earth will see Starman at slightly different coordinates.

“I quickly recalculate, get the new coordinates, go to my images and thanks to the wide field captured by my telescopes… boom!

“There it was!! Impossible to miss!! It had been right there all along, I just never noticed!”

Mr Andreo’s breathtaking stills of the Roadster can now be viewed on his website Deep Sky Colours.

There’s a ‘Lost City’ Deep in The Ocean, And It’s Unlike Anything We’ve Ever Seen : ScienceAlert
Lightning Strikes Create a Strange Form of Crystal Rarely Seen in Nature : ScienceAlert
Incredible Footage Shows Planets Circling a Star Light-Years Away : ScienceAlert
Mysterious ‘Zone of Uncertainty’ Inside The Brain Reveals a Surprise : ScienceAlert
JWST Has Found Life’s Elemental Building Blocks in The Depths of Darkest Space : ScienceAlert