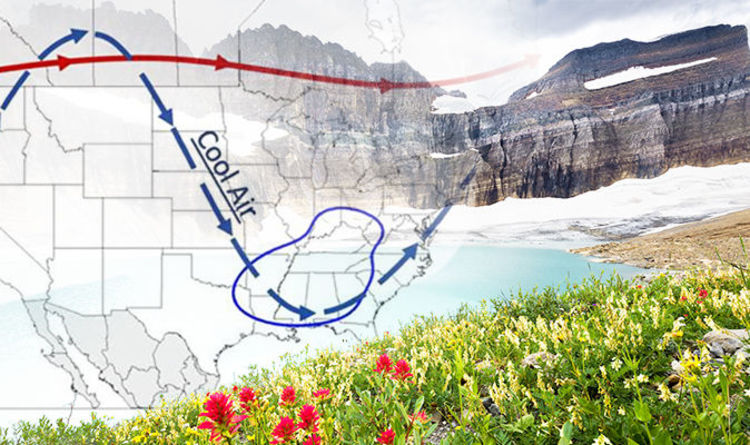 
While most scientists now agree the world is gradually heating up due to man-made climate change, a group of experts have discovered a strange anomaly which means some areas of the States, particularly the south east of the country, are actually cooling down.

The phenomenon is known as the ‘US warming hole’, and despite the name, the theory is actually responsible for a chilling effect.

During the winter and spring, the US warming hole sits over the south east of the USA and allows freezing winds from the Arctic to cool down the region.

The winds come from the North Pole’s polar vortex – a low pressure zone in the atmosphere that brings with it cold air from the Arctic circle.

This leads to cooler than normal temperatures, by 1.2 degrees Fahrenheit, in the south east over winter and spring, and following these seasons, the US warming hole moves north towards the midwest of the country.

The research, led by Dartmouth University, in New Hampshire, America, also found that winter temperatures in the US warming hole are also influenced by the jet stream – a stream of air up to 16 kilometres above the Earth’s surface which moves weather systems around the globe.

Previous studies have shown that global warming and melting ice caps lead to a ‘wavier’ jet stream, which in turn is having a bigger impact on the US warming hole, making it more volatile and pushing it more easily around the country.

Jonathan M Winter, an assistant professor of geography at Dartmouth and principle investigator for the research, said: “By discovering that the US warming hole’s location depends on the season, we’ve found a new way to help understand this phenomenon.”

Trevor F Partridge, a graduate student in earth sciences at Dartmouth and the study’s lead author, added: “”For example, the recent extreme cold snaps in the Southeast, which seem counterintuitive to global warming, may be related to the US warming hole.”

While the warming hole does lead to cooler temperatures in the winter and spring, the researchers have found that the opposite is true in the summer time.

The scientists behind the study cite more intensive farming, greater levels of air pollution and increased irrigation in the summer as a reason for the opposite effect.

Previous research has also shown that, again, the jet stream is responsible for this.

Changes in the jet stream since 1960 has found that it has increased extreme weather phenomenons such as droughts, heatwaves and cold snaps including floods which has been exacerbated by global warming.

Valerie Trouet, from the University of Arizona, and lead author of the older study said: “We find that the position of the North Atlantic Jet in summer has been a strong driver of climate extremes in Europe for the last 300 years.”

And the situation is reversed when the jet stream is in the extreme south.

A Planet Almost Exactly Earth’s Size Has Been Found 72 Light-Years Away : ScienceAlert
Millions Are at Risk of Flooding Due to Climate Change – But Not Where You’d Think : ScienceAlert
New Prototype Device Generates Hydrogen From Untreated Seawater : ScienceAlert
Ancient Goo Spills The Secrets of How The Egyptians Mummified Their Dead : ScienceAlert
No One Likes Commutes, But They May Actually Be Good For Mental Health, Study Finds : ScienceAlert