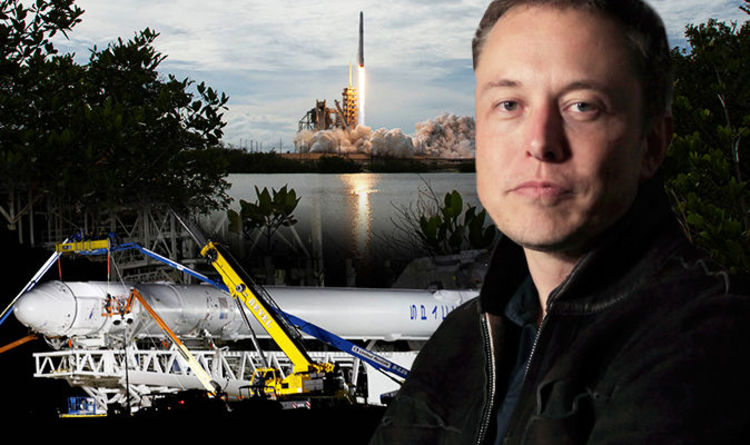 
After achieving huge success with Falcon Heavy, space entrepreneur Mr Musk hopes to now build a worldwide broadband network with satellites after approval was given by the top US communications regulator Federal Communications Commission (FCC) on Wednesday.

This weekend’s main launch involves a PAZ satellite being blasted skyward for Hisdesat of Madrid, Spain.

Along with the observation satellite, two demonstration ones – known as Microsat-2a and Microsat-2b – will also be attached to the payload on Saturday’s launch from Vandenberg Air Force Base in California.

The LA Times reported: “The demonstration satellites, which will be in the shape of a box measuring 3 feet by 2.2 feet by 2.2 feet, will be part of the first phase of testing for SpaceX’s so-called constellation, which the company has said would initially consist of 4,425 satellites.”

Mr Musk previously spoke in 2015 about his plans to drive a satellite-internet business that would  provide low-cost broadband internet worldwide and help to fund a future city on Mars.

He said the company wanted to create a “global communications system” that he compared to “rebuilding the internet in space.” and it would be faster than traditional internet connections.

According to Geekwire, the project has been given the name Starling.

Why is SpaceX sending internet satellites into space?

SpaceX is said to be one of several companies, including OneWeb and Boeing Co, that plan to launch hundreds or even thousands of small satellites to provide “fibre-like” internet access, especially in rural areas.

There are currently about 14 million rural Americans and 1.2 million Americans on tribal lands who lack even slow-speed mobile broadband.

She said: “They will multiply the number of satellites in the skies, creating extraordinary new opportunities …The FCC should move quickly to facilitate these new services while underscoring our commitment to space safety.”

What has happened to SpaceX’s Tesla Roadster?

SpaceX’s cherry-red Tesla Roadster, launched into space by the Falcon Heavy rocket two weeks ago, is currently cruising through space as it makes its elliptical orbit of the Sun.

READ MORE: SpaceX launch: Where is Tesla Roadster RIGHT NOW? How far is it from Earth?

It was snapped earlier this week by eagle-eyed astrophotographer Rogelio Bernal Andreo.

The California-based astronomer wrote on his website: “Once footage of the car and Starman started to arrive and people wondered if it could be observed from Earth, there was just one thing in my mind: to find the answer to that question and if yes, to try take a picture – better yet, a video – of it.

“I spent a big part of February 8 trying to find the Roadster’s ephemeris, that is, a list indicating the coordinates of the spacecraft over time. Luckily, NASA’s Jet Propulsion Lab, which produces ephemerides for thousands of celestial objects, had just added the roadster to their list, designated 2018-017A.”

NASA is also keeping tabs on Tesla, monitoring its paths via its Horizons database.