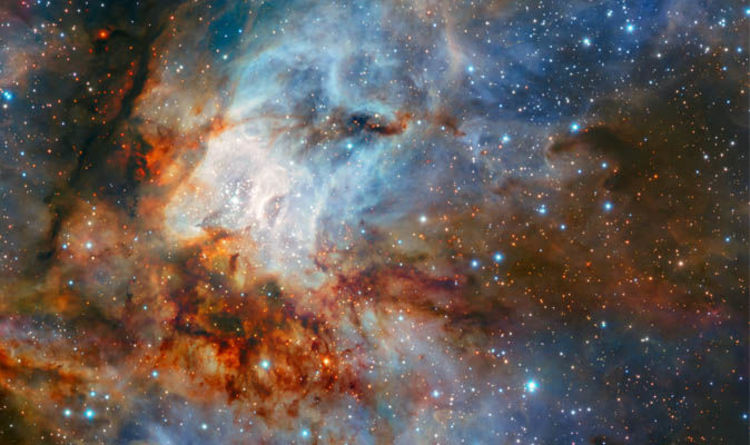 
The gigantic star cluster found some 5,500 light years from Earth was captured by the European Southern Observatory (ESO).

The ESO’s Very Large Telescope took the incredibly detailed and mesmerising picture of the star cluster and surrounding clouds.

The glowing clouds of gas are pictured swirling around the relatively young cluster with darker tendrils weaving in-between the stars.

RCW 38 is home to hundreds of young, hot and giant stars in the constellation Vela The Sails.

The ESO said in a statement: “The central area of RCW 38 is visible here as a bright, blue-tinted region, an area inhabited by numerous very young stars and protostars that are still in the process of forming.

“The intense radiation pouring out from these newly born stars causes the surrounding gas to glow brightly.

“This is in stark contrast to the streams of cooler cosmic dust winding through the region, which glow gently in dark shades of red and orange.

“The contrast creates this spectacular scene — a piece of celestial artwork.”

Previous photographs of this part of space were never quite as detailed as the latest snapshot.

But thanks to the ESO’s HAWK-I infrared imager on the telescope, the Observatory was able to peer into the infrared wavelength to peel back the layers of dust obscuring the view.

The HAWK-I imager also blasts four beams of laser into the night sky to correct the effects of atmospheric turbulence, which the ESO claims creates a sharper image.

The Observatory said: “HAWK-I is installed on Unit Telescope 4 (Yepun) of the VLT, and operates at near-infrared wavelengths.

“It has many scientific roles, including obtaining images of nearby galaxies or large nebulae as well as individual stars and exoplanets.

“GRAAL is an adaptive optics module which helps HAWK-I to produce these spectacular images.”

The RCW 38 photograph comes as part of a series of test observations to verify the HAWK-I and GRAAL module’s capabilities.

The image can now help scientist expand their understanding of how stars are born.

The ESO is one of Europe’s leading astronomical organisation with 15 member states including the UK, Poland, Austria, Belgium, the Czech Republic, Denmark, France, Finland, Germany, Italy, the Netherlands, Portugal, Spain, Sweden and Switzerland.

The Very Large Telescope is housed in Chile, the ESO’s host state, and the Observatory is also partnered with Australia.

Termites Love Global Warming So Much That They May Make It Worse, Says Study : ScienceAlert
We Just Got Our Closest View of Europa in 20 Years, And We Can’t Stop Staring : ScienceAlert
Experts Estimate The Scale of The Nord Stream Pipelines Methane Leak : ScienceAlert
Ancient Maya Cities Appear to Have Been Riddled With Mercury Pollution : ScienceAlert
Watch a Tiny Robot Blob Transform Into Even Tinier Bits to Squeeze Through Cracks : ScienceAlert