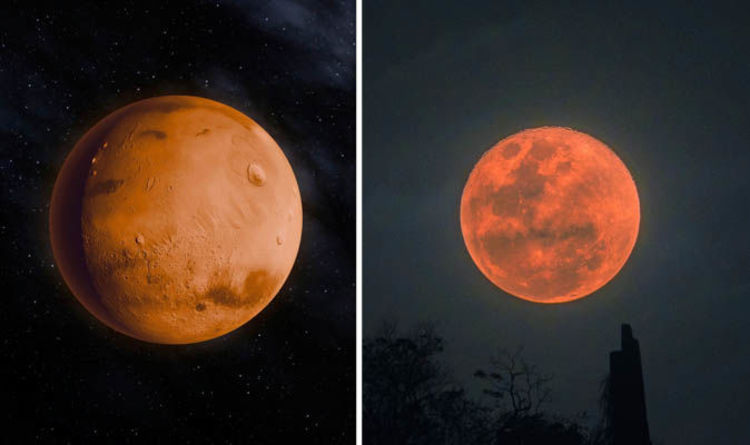 
Stargazers around the globe are ready to welcome the total lunar eclipse Blood Moon in the evening hours of Friday, July 27.

The Red Planet will also brightly light up the night skies that even when the red planet sits directly opposite the sun with the Earth in between.

Royal Observatory Greenwich astronomer Affelia Wibisono told Express.co.uk: “On July 27 we’ve got Mars at opposition and that coincides with the total lunar eclipse that will be visible over the UK.”

The astronomer said the event will be particularly exciting because of this combination.

What is planetary opposition?

In astronomy, planetary opposition occurs when two heavenly bodies align on opposite sides of the celestial sphere, typically as seen from Earth.

Opposition is usually also marked by a planet being at its closest orbital point to Earth.

The last opposition seen from Earth was Saturn’s approach on June 27 when the ringed orb was at its closest and brightest this year so far.

The Red Planet’s proximity to Earth will make it appear brighter at night than Jupiter – the biggest planet in the solar system, according to the Royal Observatory.

When Mars enters opposition on July 27, the Red Planet will be at its closest vantage point since 2003 – which at the time was closer than it has ever been in 60,000 years.

The close approach is expected to occur sometime around 8.50am BST, or around 12 hours before the eclipse.

This orbital approach when Mars, or any other planet in the system, is at its closest orbital point to the sun is known as perihelia opposition.

NASA’s Mars Exploration Program explained: “During opposition, Mars and the sun are on directly opposite sides of Earth.

“From our perspective on our spinning world, Mars rises in the east just as the sun sets in the west.

“Then, after staying up in the sky the entire night, Mars sets in the west just as the sun rises in the east.

“Since Mars and the sun appear on opposite sides of the sky, we say that Mars is in ‘opposition’.”

If both Mars and Earth followed perfectly circular orbits around the sun, the opposition would be as close as the two planets can get.

But the planets follow elliptic paths around the sun and move at different speeds, which creates a whole lot of confusion for amateur astronomers.

The discrepancies in orbital paths also mean Mars takes about twice as long to travel around the sun as Earth.

Astronomers Think They Know The Reason For Uranus’s Kooky Off-Kilter Axis : ScienceAlert
New Discovery Means Parkinson’s Could Be Diagnosed With a Swab in Just 3 Minutes : ScienceAlert
‘Dark Data’ Is Leaving a Huge Carbon Footprint, And We Have to Do Something About It : ScienceAlert
Biology Inspires a New Kind of Water-Based Circuit That Could Transform Computing : ScienceAlert
Secret Clues in Tutankhamun’s Tomb Reignite The Idea That Nefertiti Is Hidden Nearby : ScienceAlert