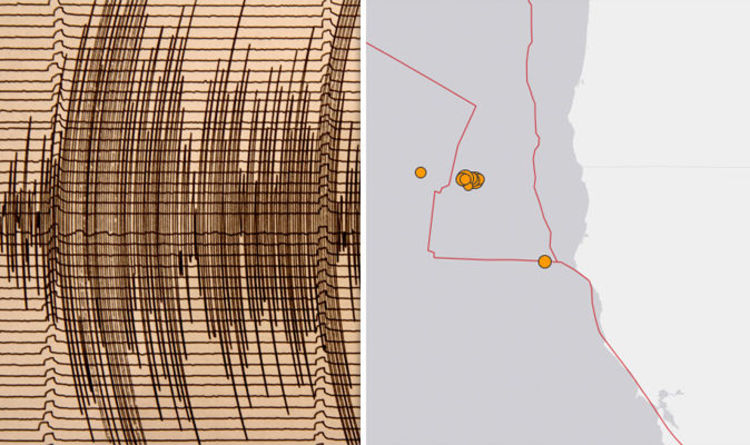 The most powerful was a strong 5.4 magnitude quake which hit at 7.44am, according to reports from the US Geological Survey (USGS).

Don Blakeman, a geophysicist at the National Earthquake Information Center, said that there is no risk of tsunami from the earthquakes which struck about 126 miles west of Crescent City, California.

However, the tremors could be part of a much more serious problem and that the Ring of Fire could be ready to unleash devastating quakes.

Experts know that the Ring of Fire has to potential to unleash some catastrophic quakes – recent tremors in Mexico and Japan give evidence to this.

And a series of relatively strong quakes could push it over the edge.

Earlier this year, John Vidale, director of the Southern California Earthquake Center, said that the Ring of Fire could be on the brink.

He told the LA Times: “A 5.3 could be damaging if it was right under our feet.

“It’s right on the edge of being an earthquake that could be dangerous. It’s a reminder that we need to be ready in the future.”

Also running through Oregon is the San Andreas fault – which begins near Cape Mendocino, California, continuing along Oregon and Washington, and ending as far north as Vancouver Island, Canada.

Experts have previously warned that minor earthquakes along this fault line could trigger a devastating one.

Thomas Jordan, head of the Southern California Earthquake Center, told the Los Angeles Times last year: “Any time there is significant seismic activity in the vicinity of the San Andreas Fault, we seismologists get nervous.

“Because we recognise that the probability of having a large earthquake goes up.”