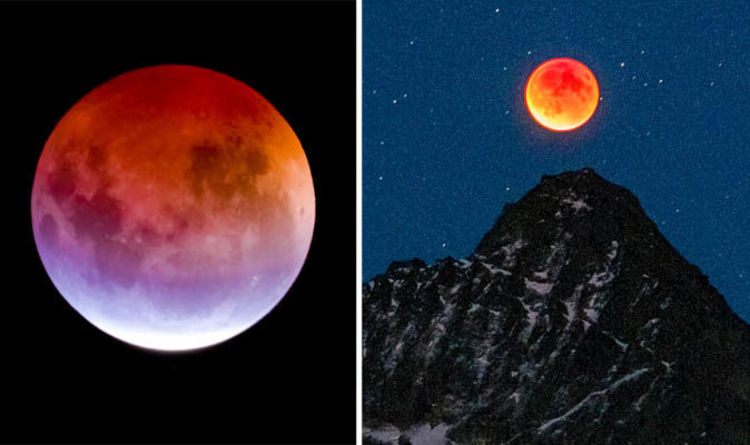 
A total lunar eclipse roughly occurs once or twice a year when a full moon passes through the centre of Earth’s shadow.

Like clockwork, a lunar eclipse is dictated by the heavenly movements of the sun, the Earth and the moon, which normally seem out of sync, but perfectly align for one special moment.

The last total lunar eclipse graced the night skies with its presence on the night of January 31, 2018, and was the spectacular Super Blue Blue Blood Moon combo.

Astronomy enthusiasts are now anxious to know whether or not another lunar eclipse Blood Moon is looming just over the horizon.

Will there be a Blood Moon eclipse this week?

The stellar alignment will result in the moon disappearing into the Earth’s shadow and reappearing as the ominous Blood Moon.

During the eclipse, the moon will first pass through the Earth’s faint shadow known as the penumbra.

So-called penumbral eclipsing is typically very faint and most people would not notice it without knowing it was happening.

The real spectacle will start when the moon passes into the umbra, which will look like a black disk moving across the glowing face of the moon.

But as the moon progresses into the umbra a brilliant trick of light will paint the moon a deep red to orange colour, rather than hide it from sight.

The effect is known as Rayleigh scattering and according to Professor Mark Birkshaw, University of Bristol, is caused by scattered sunlight in the Earth’s atmosphere.

The astronomy expert told Express.co.uk: “Although the moon is in the shadow of the Earth, that is no direct sunlight is expected to hit the moon, the sun illuminates the Earth’s atmosphere and that causes some of the sunlight to be scattered in the direction of the moon.”

As the light scatters through the atmosphere, certain bands of colour on the visible spectrum are filtered out and fall on the moon.

Red and orange bands of light are least affected whereas blue light which typically illuminates the moon is filtered out.

The result of this effect is the spectacular Blood Moon lunar eclipse.

Professor Birkshaw added: “Total lunar eclipses happen about once or twice a year.

“They are a very nice thing to watch because they happen swiftly and you can get some nice colour effect with it.”

What time is the Blood Moon eclipse this week?

The total lunar eclipse will begin on the nightside of the Earth on Friday, with some places seeing a redder moon in the early hours of Saturday, July 28.

In the UK, the Blood Moon will already appear eclipsed when it peaks over the horizon sometime around 8.50pm BST.

The moment of greatest eclipse, or maximum eclipse, will occur over the UK after 9.20pm BST and that will be the moment the moon reaches the dead-centre of the Earth’s umbra.

By around 12.30am on Saturday, the moon will completely move out of the Earth’s shadow, glowing its usual white colour.

From start to finish the eclipse will last three hours and 55 minutes and totality will last one hour and 43 minutes – the longest total lunar eclipse of the 21st century.

Does IQ Decline as We Age? One Type of Intelligence Peaks in Your Twenties : ScienceAlert
One of The World’s Largest Organisms Is Disintegrating. Here’s How We Might Save It. : ScienceAlert
The Tonga Eruption’s 50 Million Tons of Water Vapor May Warm Earth For Months to Come : ScienceAlert
Why House Fly Barf Is an Overlooked Potential Vector of Disease : ScienceAlert
Early Puberty in Girls Surged in The Pandemic, And We May Finally Know Why : ScienceAlert