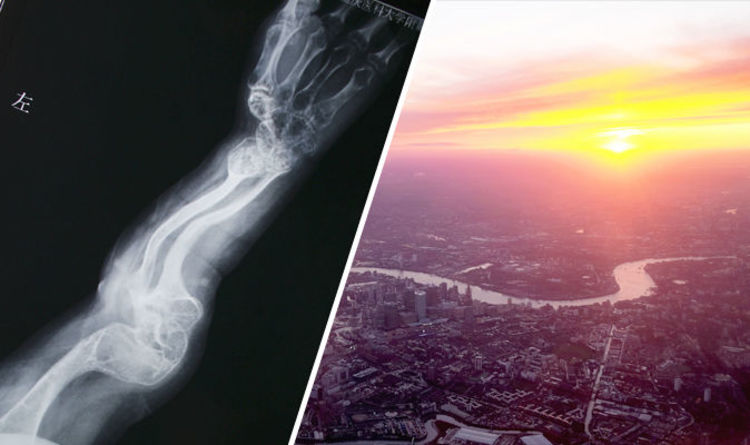 
In a dramatic increase, the number of children suffering from the condition, which can cause bowed legs due to soft bones, has almost doubled since 1997.

Haris Majeed, who published the report in Scientific Reports, claimed that the weather was responsible for the unexpected rise.

He wrote: “Climatologists knew that the UK receives lower summer sunshine than other parts of the world, but no one ever thought of the effect it had on specific health implications, such as rickets.”

Researchers have argued a rise in sea surface temperatures is causing more rain in the UK and preventing the absorption of sunshine.

Mr Majeed added: “Sea surface temperatures are getting warmer over the North Atlantic, and are known to fluctuate every 60 to 80 years.

Rickets is caused by a lack of Vitamin D, which has been absorbed from the sun, in the body.

Children need a total of six hours of sunshine a month in order for their bodies to produce enough vitamin D.

However, the study has found that an increase in cloud cover means that children in the UK are only receiving around two hours of sun a month.

The UK has only received an average of 183 hours of sunshine in summer months since the study began.

It’s also expected that the dull summers will remain in place for at least the next two decades.

The figures are the highest they’ve been since 1963.

Mr Majeed explained: “The primary source of vitamin D is from the sun’s exposure to the human skin, which is essential to both adults and children for the metabolism of calcium and phosphorous.

“In the absence of vitamin D, only 10 to 15 per cent of dietary calcium and around 60 per cent of phosphorus is absorbed in the body.”

Mr Majeed added that he hoped his report could “save at least a few children from becoming disabled”.

Experts Estimate The Scale of The Nord Stream Pipelines Methane Leak : ScienceAlert
Behold, The Epic Last Images Taken by NASA’s Asteroid Redirection Test Spacecraft : ScienceAlert
We Just Got Our Closest View of Europa in 20 Years, And We Can’t Stop Staring : ScienceAlert
Still Short of Breath? Here Are 3 Ways COVID-19 Can Damage Lungs Long Term : ScienceAlert
Termites Love Global Warming So Much That They May Make It Worse, Says Study : ScienceAlert