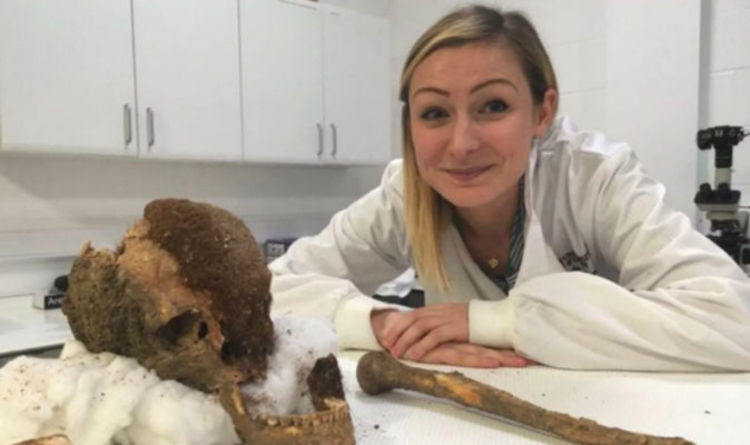 
Academics in forensic science from the University of Derby have been studying the ancient skeleton and uncovered some remarkable findings.

Despite the age of the remains scientists were fascinated to discover that the man had “beautiful” teeth and did not have the same poor oral hygiene of most men from the Bronze era.

Sanita Nezirovic, who has been studying the skeleton, said: “His teeth seem absolutely beautiful, especially for the age when you think about 3,500 years ago.

“He has better teeth than most people nowadays, almost.”

Studies indicate that most people from the time had worn-down teeth that were in a poor condition.

The type of food eaten during the Bronze Age and a lack of oral hygiene have been blamed for the bad teeth.

Ms Nezirovic joked: “This would have been a catch for the ladies.”

However, it wasn’t just the good teeth that gave the mysterious man a great smile.

Ms Nezirovic was also shocked by the symmetry of the face when studying the skeleton’s bones.

By investigating the bones of the skull, scientists were able to identify the rough age of the man.

An examination go the development of a flake of bone on the clavicle highlighted to the scientists that the body belonged to someone aged between 17 and 21.

Other discoveries made about youth’s body included his height – between 5ft 6 inches and 5ft 9 inches.

Little else could be discovered about the person with the “perfect smile” from his bones, meaning it is unknown how he died.

However, the man was buried with a horsehair blanket and beaker, which experts say indicates he was likely to have been an important man.

Wolves Really Can Become Attached to Humans Like Dogs Can, Adorable Study Finds : ScienceAlert
Hubble And Webb Pics Reveal DART Impact Was Even Bigger Than Expected : ScienceAlert
We Just Got Our Closest View of Europa in 20 Years, And We Can’t Stop Staring : ScienceAlert
Watch a Tiny Robot Blob Transform Into Even Tinier Bits to Squeeze Through Cracks : ScienceAlert
These Are The Most Distant Star Clusters Ever Seen, And We Nearly Missed Them : ScienceAlert