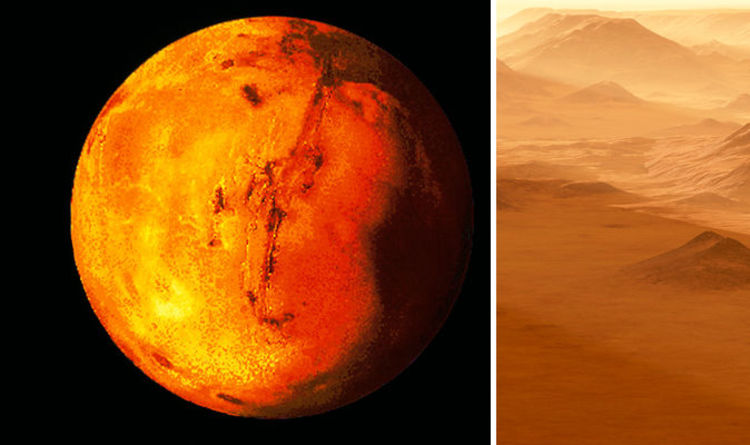 
The portable DNA sequencing device dubbed MiniON was created by Oxford Nanopore Technologies in the UK and is used to detect microbes and sequenced DNA from active microbes.

MiniON has already been tested in the Axel Heiberg region over 500 miles from the North Pole – the device revealed microbes in salty areas in roots as deep as 1,970 feet, showcasing the potential of the technology on a space exploration mission.

The researchers behind the life-detecting hardware published their findings in the Frontiers of Microbiology journal.

It reads: “The analog study site is located near the McGill Arctic Research Station (MARS) on Axel Heiberg Island in the Canadian High Arctic. MARS is located in a polar desert and is located in proximity to a number of high fidelity Mars analog sites of interest to astrobiology, including cold saline springs arising through permafrost, gypsum cryptoendoliths and extensive polygonal permafrost terrain underlain with ice wedges similar in structure to those observed on Mars.”

NASA has previously suggested that recurring slope lines (RSLs) could hold the key to detecting life on another planet – the organisation disclosed that they contain hydrated salts that put forward a strong case for the presence of water, and potentially life, on other planets.

However, further research claimed that RSLs are instead pieces of dirt flowing down the slope lines.

Some researchers argue that water in the atmosphere is responsible for the salts on other worlds.

Lyle Whyte, a professor from McGill University, declared that the true nature of RSLs cannot be known until they are sampled – this could be where the MiniON shows its true worth.

She explained: “It’s something we just don’t know about, and can’t know until we can drive up to an RSL and sample it.”

Ms Whyte’s calls for a mission examining RSLs have instigated calls for a small device capable of detecting life.

The professor is part of a team led by postdoctoral fellow Jacqueline Goordial from the Bigelow Laboratory for Ocean Sciences in Maine.

Ms Whyte went on: “The smaller, the better.

“Because you might only have 600 pounds to play with, and 150 of that is rover hardware.”

The MiniON, or a similar device, could be used to detect life on Mars, Europa and Enceladus.

Enceladus is the sixth-largest moon orbiting Saturn while Europa is Jupiter’s smallest moon.

Although the technology may not be used on a foreign planet for years, the team at Oxford are making changes to the sequencer to improve it life-detecting capabilities.

Watch a Tiny Robot Blob Transform Into Even Tinier Bits to Squeeze Through Cracks : ScienceAlert
We Just Got Our Closest View of Europa in 20 Years, And We Can’t Stop Staring : ScienceAlert
Termites Love Global Warming So Much That They May Make It Worse, Says Study : ScienceAlert
Deep Brain Simulation Could Alleviate OCD When Other Treatments Have Failed : ScienceAlert
Amazing New Fossils Provide Earliest Known Traces of The Evolution of Our Jaws And Limbs : ScienceAlert