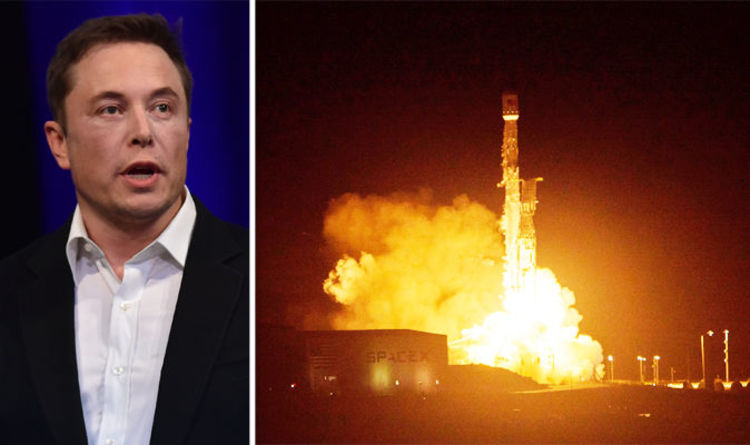 
The maiden flight of the new spacecraft is now set to take place on February 6 at NASA’s headquarters in Cape Canaveral, Florida.

The rocket is set to launch for take-off from Launch Pad 39A, the same one used for the Apollo moon landings and the space shuttle flights.

Making the announcement on Twitter, Mr Musk said: “Aiming for first flight of Falcon Heavy on Feb 6 from Apollo launchpad 39A at Cape Kennedy.

Hundreds of people have previously travelled to Kennedy Space Centre to see rockets and the space shuttles launch.

Should the debut flight of the Falcon Heavy need to be delayed, a backup launch date of the following day is also available.

There has been no confirmation what time lift-off is expected.

The announcement with a scheduled date for the first launch of the rocket comes after SPACEX successfully tested the rocket’s 27 first-stage engines on the launchpad last week.

However, there is no guarantee the launch will be a success.

Last year Mr Musk warned: “There’s a lot that could go wrong there.

“I encourage people to come down to the Cape to see the first Falcon Heavy mission, it’s guaranteed to be exciting.”

The South African-born entrepreneur’s space project has been hit by a number of issues in recent months, missing its target to launch the rocket by the end of 2017.

The most recent setback for the organisation came after the US Government failed to agree on a budget earlier this month, leading to a temporary shutdown of federal services.

With personnel from the federal organisation used by SpaceX to assist with operations, Mr Musk’s planned rocket launch earlier this month was forced to be postponed.

In another incident earlier this month that delayed progress, the Falcon Heavy had to twice postpone a series of static-fire tests due to “logistical and safety concerns”.

Launch tests at the start of the month were also postponed as severe US weather made conditions too dangerous.

Bitcoin’s Climate Impact Is Bigger Than Beef Farming – And It’s Only Getting Worse : ScienceAlert
Fossil-Filled Australian Caves May Be 500,000 Years Older Than We Thought, Study Finds : ScienceAlert
We Just Got Our Closest View of Europa in 20 Years, And We Can’t Stop Staring : ScienceAlert
Hubble And Webb Pics Reveal DART Impact Was Even Bigger Than Expected : ScienceAlert
These Are The Most Distant Star Clusters Ever Seen, And We Nearly Missed Them : ScienceAlert