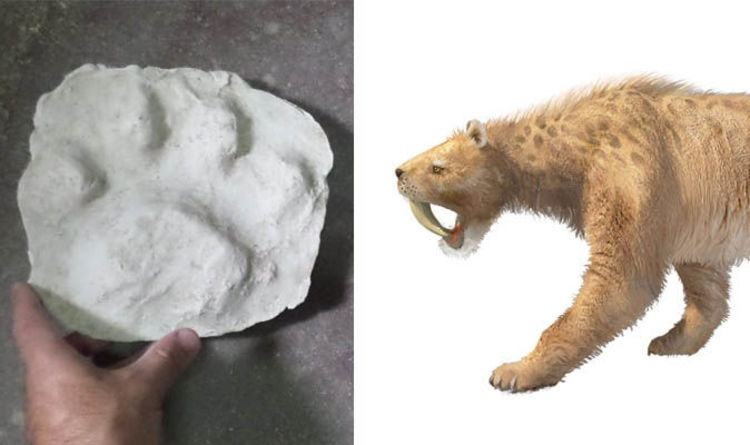 
The ground-breaking discovery was found close to the current urban centre, in the heart of the tourist district.

Miramar has been renowned since the nineteenth century as an exceptional location for paleontological discoveries.

However, this is the first time such footprints have ever been found.

Palaeontologist Federico Agnoli said: “In our country we have found many sabre-toothed tiger teeth but they have always been skeletal remains.

“Although the bones give data, they don’t tell you how the animal walked, and how it lived.

“The prints give much more information.”

Mr Agnoli explained that the plains which extend south from Buenos Aires were very different to those we can see today.

The landscape consisted of extensive scrub prairie, and coastal lagoons.

It was inhabited by long extinct giant mammals such as the hippo-sized toxodon, ancient armadillos known as glyptodons, enormous land sloths, horse-like creatures known as macrauchenia, giant rodents and birds as high as a metre tall (2.9 feet.)

The palaeontologists from the University of Punta Hermengo, the Azara Foundation, the Municipal Museum of Miramar, the Argentinian Natural Science Museum, and the National Council for Scientific and Technological Research were able to extract valuable information from the prints, which are 30 centimetres (11.8 inches) in diameter.

Mr Agnoli said: “The prints show that the animal was adapted to walking long distances across the scrub prairie.

“They also show that the front legs were wide and robust. This occurs in animals that are not great sprinters, but instead wait in hiding ready to ambush a large mammal.

“They would pounce on their prey, pinning it down, holding it with their front legs before finishing it off with their dagger-like feline canines.

“The sabre-tooth tiger, known as a Smilodon, is believed to have weighed up to 300 kilograms (47 stone) with teeth that protruded 19 centimetres (10 inches) from its mouth with a bite angle of 120 degrees, making it a terrifyingly formidable predator.”

Minor Google Meltdown Exposes The World’s Utter Reliance on a Single Tech Company
Record-Breaking Experiment Could Solve a Huge Challenge in Quantum Computing
‘Structured Water’ Is Not What People Claim. Don’t Believe The Hype, Scientist Says
An Experimental Surgical Robot Is Headed to The International Space Station
A Common ‘Forever Chemical’ Has Just Been Linked to Liver Cancer in Humans : ScienceAlert