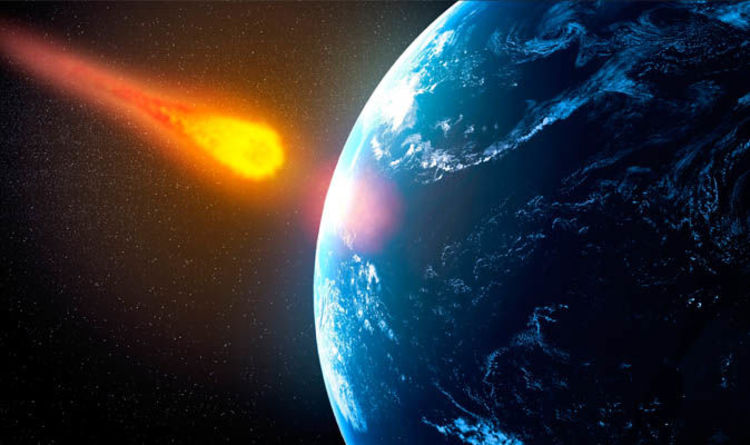 
The barrelling asteroid will zip past the planet just after 1pm BST (noon UTC) on Sunday, September 9 – just five days after it was discovered.

NASA expects Asteroid RC to come incredibly close to the planet at just half the distance between the Earth and the Moon.

The astronomer said: “Next September 9, at 12.06am UTC, the just discovered near-Earth Asteroid 2018 RC, with an estimated diameter of 32m to 71m, will have a very close flyby with our planet, coming as close as 220,000km – about 50 percent of the average lunar distance.

“Of course, it is a totally safe close encounter.

“Just before the flyby, it will be visible with small telescopes – 10cm or so in diameter – shining around magnitude 12.”

NEOs are all comets and asteroids on orbital paths that bring them within Earth’s vicinity.

NASA notes these “close passages” are typically thousands and millions of miles away from Earth.

Asteroid RC was discovered just three days ago, September 3, by the ATLAS survey in Hawaii.

The discovery was announced on the following day by the Minor Planet Center.

If the upper estimate is correct, the asteroid is almost as wide as four double-decker London buses lined up in a row.

Ahead of the approach, Mr Masi snapped a photo of the asteroid in the early morning hours on Thursday, September 6.

The asteroid photo was taken with the Virtual Telescope Project’s Elena robotic telescope.

The 120-second-long exposure features a short white dot in the middle of the photo – the asteroid.

If you would like to watch the asteroid as it whizzes past the planet on Sunday, Mr Masi said the Virtual Telescope Project will broadcast the view from its telescopes live this weekend.

He said: “At Virtual Telescope, we will show it live, online, thanks to our technologically advanced telescopes.

“The live feed is scheduled for September 8, 2018, starting at 10pm UTC, at its peak in brightness.”

You can watch the free asteroid live stream by clicking here.

Scientists Gave Young Mice The Blood of Old Mice. Then Things Got Weird : ScienceAlert
Robot Shows It’s Possible to Swim Through The Emptiness of a Curved Universe : ScienceAlert
Deep-Sea Sponges Can ‘sneeze’ Out Mucus, and The Footage Is Weirdly Mesmerizing : ScienceAlert
Thinking Hard and Long Can Cause Brain Drain : ScienceAlert
A Common ‘Forever Chemical’ Has Just Been Linked to Liver Cancer in Humans : ScienceAlert