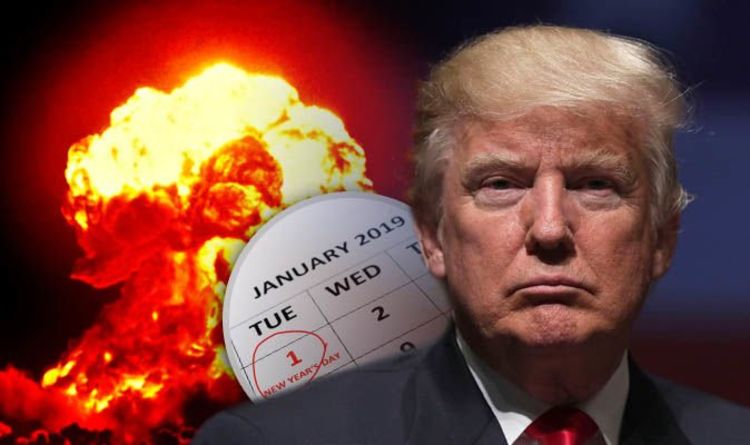 Psychic and medium Craig Hamilton-Parker believes he has the paranormal ability to predict future events before they happen. With the current year slowly creeping towards its end, Mr Hamilton-Parker shared some of his terrifying visions of the year 2019. The psychic prophesied war in the Middle East, an attempt to impeach US President Donald Trump and a hard Brexit from the European Union. Mr Hamilton-Parker claimed he has already proven his extraordinary abilities after he correctly prophesied a number of events which took place in 2018.

“And I talked a lot about hurricanes in particular and you’ll see some major hurricanes hit America and I talked about the typhoons in the Far East, that there were going to be record ones and that has happened and hit at places I’ve said.”

So, what exactly has Hamilton-Parker predicted will happen in the year 2019?

Predictions for 2019: A psychic medium believes war and conflict will break out in 2019 (Image: GETTY)

One of the biggest bombshells for the United States will be an attempt to impeach President Trump from his position in the Oval Office.

Mr Hamilton-Parker said President Trump will ultimately not be impeached but his position will take a hit over a serious healthcare.

The psychic said: “I fell, talking of Donald Trump, that he will be taken ill during 2019 but I don’t think this will be a major, serious thing that will take him out of his presidency or anything like that.

“I don’t think it’s life-threatening but it’s maybe something like a perforated bowel came to mind? Something like that.

“Something quite serious but not going to kill you. He may be unable to do the job for a short period of time.”

Goring tensions between the West and the East will manifest in 2019 when President Trump challenges his Russian counterpart over Syria, Mr Hamilton-Parker claimed.

He said: “I think we’re going to have serious problems this year in Syria but this time a conflict between Russia and America.

“I don’t think it will go out to a full military conflict but I think it will be a gradually escalating conflict with Russia, that is going to give the world a lot of problems and there will be a lot of worries about this.

“I think we may see troops posted to a nearby country – somewhere like Israel, although they might be a bit too dangerous to do that, or somewhere like Saudi Arabia or a friendly country.”

The psychic said the conflict will involve a lot of “sabre-rattling” rather than actual warfare.

Natural disasters will strike the US

After he predicted a bout of hurricanes in 2018, Mr Hamilton-Parker now believes powerful earthquakes will rock the US to its core.

“And remember I’m fallible, please, because don’t go panicking when I make these predictions. Treat this as a bit of an experiment, please people.

“But I do feel there’s going to be a lot more seismic activity in the USA.”

Mr Hamilton-Parker believes he has powers allowing him to predict the future (Image: CRAIG HAMILTON-PARKER)

The psychic is certain Britain will leave the EU without a deal (Image: GETTY)

After months of aimless back-and-forth discussion between Britain and the EU, the UK will leave the economic bloc without securing a deal.

Once the Brexit process is complete, Mr Hamilton-Parker predicts Prime Minister Theresa May will resign from her post at Downing Street.

He said: “I’ve always had a strong connection with this Brexit idea and all the way through I’ve said it’s going to be a hard Brexit.

“So I’m sticking with what I’ve said up to now and I still feel it’s a Hard Brexit.