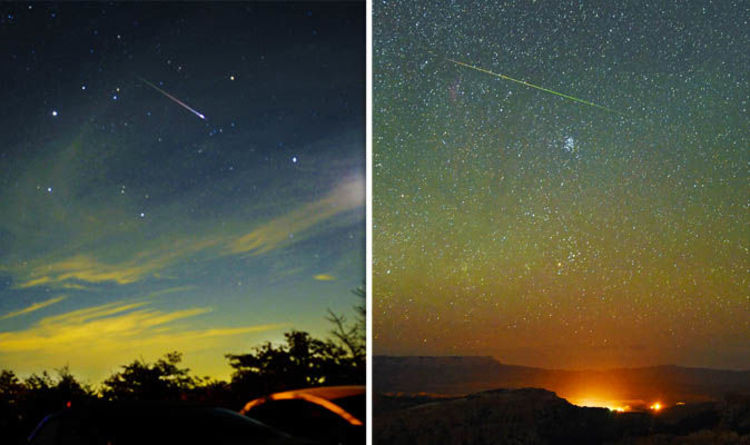 
Weather permitting, the Perseid meteor shower promises to be among the most amazing events of the year, second only to the Geminids around mid-December.

The stunning meteors peak around this time of the year, producing as many as 100 shooting stars every hour.

Keen stargazers may have already spotted one or two streaking meteors since around mid-July when the Perseids started to appear.

But the shooting stars have only just began to build in intensity and will soon burst into the night skies in full glory between the night of Sunday, August 12, and the morning of Monday, August 13.

The Perseid meteors are the cosmic debris and rubble left behind in the orbital path of Comet Swift-Tuttle as it barrels around the solar system.

The giant Halley-type comet orbits the Sun roughly every 133 years and historical records suggest it may have been observed as early as 68 BC.

Every between mid-July and the last week of August the Earth approaches the comet’s orbital path.

During this brief window, the planet interacts with the so-called Perseid cloud – a cloud of particles, meteoroids and broken off space rock.

The interstellar debris slams into the Earth’s atmosphere at impressive speeds and burns up in the night skies, producing bright fireballs.

According to NASA, the fireballs are the Perseids’ signature spectacle thanks to their larger cometary particles.

Astronomers typically look forward to around 100 meteors lighting up every hour but this year they only expect up to 60.

On the odd occasion, however, the shower has been known to exceed all expectations during the peak.

In August 2016, the shower produced about 150 meteors an hour and in 2009, the estimated peak was about 173 but some of the fainter meteors could have been washed out by Moonlight.

Once they show up in the sky, the Perseids appear to radiate from the Constellation Perseus which has earned them their namesake.

But there is no need to search for the constellation because the shooting star will zoom across the sky in ever direction conceivable.

The Perseids are best viewed from the Northern Hemisphere in the pre-dawn hours.

When is the Perseid meteor shower peak?

Individual Perseid meteors have already been spotted as early as July 16 but the best is yet to come this weekend.

According to Dr John Mason of the British Astronomical Association, the meteors will start to increase in activity between 10pm BST on August 12 and the predawn hours on August 13.

The space expert said: “The best observed rates are found when the Perseid radiant is highest in the sky during the pre-dawn hours, but even in the mid-evening from 10pm the radiant is already at a quite favourable elevation above the horizon.

“Under cloudless skies, from a dark site, observers can expect to see between 40 and 60 meteors each hour near the peak.

“Even in towns or cities observed rates may still be around 10 to 20 an hour in the early morning hours when the radiant is high.”

The best weather conditions to see the meteor shower peak are clear and cloudless skies with little to none moonlight.

This year the shower is aided by the darkened August New Moon lunar phase.

For optimal meteor-spotting chances be sure to stay away from bright lights and sources of urban pollution like street lamps, cars and buildings.

Discovery of a New Rare Blood Type Could Save The Lives of Future Newborns : ScienceAlert
NASA Is Sending a Rotorcraft to Titan in 2027. Here’s Where It Will Land. : ScienceAlert
We May Finally Know Why Oceans in The Southern Hemisphere Are Getting So Warm : ScienceAlert
Scientists Win Physics Nobel Prize For Proving Einstein Wrong : ScienceAlert
Long COVID Is Still Raising More Questions Than Answers, Say Researchers : ScienceAlert