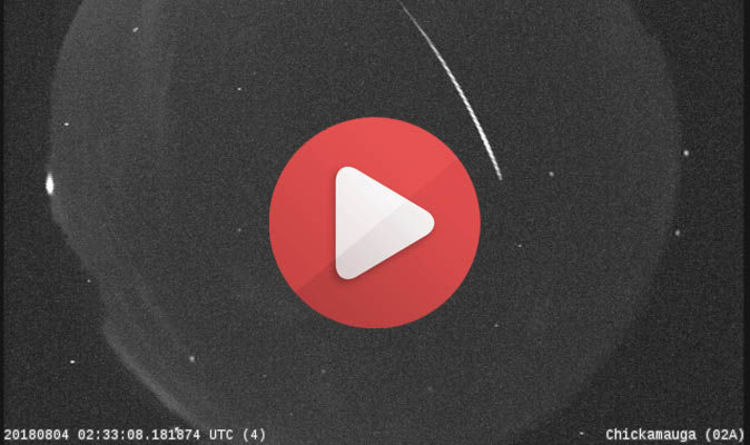 
The Perseid shower will peak between the night of Saturday, August 11 and the morning of Monday, August 13.

The space agency said the meteors are best seen in the pre-dawn hours around 2am local time when the Perseids are most intense.

But if the wee morning hours seem a little daunting the good news is NASA’s Meteor Watch team has you covered.

On Monday morning NASA Meteor Watch will broadcast online a live feed of the Perseids dashing across the sky.

The NASA live stream will be hosted on the official NASA Meteor Watch Facebook page from 3am UK time.

NASA said: “How can you see the Perseids if the weather doesn’t cooperate where you are?

“A live broadcast of the meteor shower from a camera in Huntsville, Alabama, will be available on the NASA Meteor Watch Facebook starting around 8pm ET and continuing until the early hours of August 13.

“Meteor videos recorded by the NASA All Sky Fireball Network are also amiable each morning; to identify Perseids in these videos look for the events labelled ‘PER’.”

If you pay a visit to the Meteor Watch Facebook page you can set a reminder ahead of the stream to get a notification once it goes live.

The live stream post is currently pinned to the top of the NASA page.

NASA’s cameras have been detecting signs of the bright Perseid fireballs as early as July 29 last month.

The Perseids start to appear at night from around mid-July when Earth approaches the orbital path of Comet Swift-Tuttle.

But the shower slowly builds in intensity over the following weeks until it erupts around mid-August into a celestial show of fireworks.

The Perseid meteors are bits and pieces of space rock debris broken off from Comet Swift-Tuttle as it barrels around the Sun every 133 years.

When the space rocks slam into the Earth’s atmosphere at full speed they disintegrate into brilliant streaks and flashes of light in the sky.

Seen from Earth, the Perseids appear to break out from a point in the sky near the constellation Perseus.

NASA explained: “All meteors associated with one particular shower have similar orbits, and they all appear to come from the same place in the sky, called the radiant.

“Meteor showers take their name from the location of the radiant.

“The Perseid radiant is in the constellation Perseus.”

Following the same convention, the Geminid meteors in December are called after their Gemini Constellation radiant and the Ursid meteor shower is named after the constellation Ursa Minor.

A New FRB Signal Has Buzzed Nearly 2,000 Times in Just Two Months, Raising a Mystery : ScienceAlert
How Many Ants Live on Earth? Scientists Came Up With an Answer : ScienceAlert
Termites Love Global Warming So Much That They May Make It Worse, Says Study : ScienceAlert
Wolves Really Can Become Attached to Humans Like Dogs Can, Adorable Study Finds : ScienceAlert
The Frogs Vanished, Then People Got Sick. This Was No Harmless Coincidence. : ScienceAlert