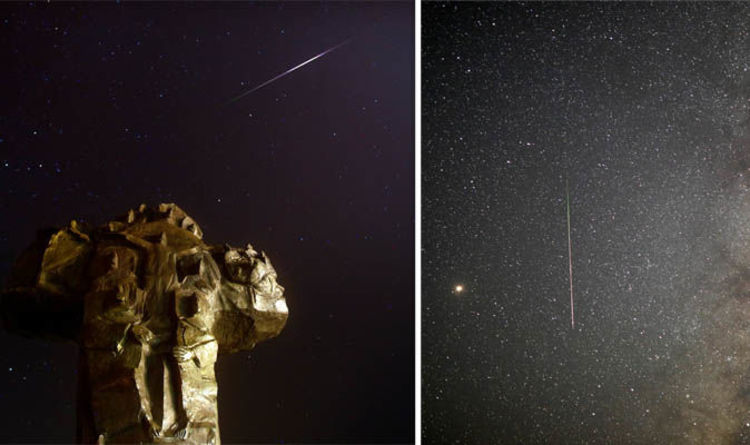 
The annual meteor shower peaked in the late evening to early morning hours between Sunday, August 12, and Monday, August 13.

The shower is often considered one of the most intense and spectacular showers of the year and astronomers world-wide stayed up all night to watch it.

But if your part of the world suffered bad weather last night or you simply chose to stay in bed instead, you may have missed the spectacle.

The good news is space agencies, observatories and astronomy groups worldwide live streamed the meteor shower from every corner of the planet.

In the US, NASA’s Marshall Space Flight Center in Huntsville, Alabama, had its cameras focused on the skies for signs of the Perseids.

NASA live streamed the shower’s peak for more than four hours this morning, catching individual streaks of bright light dashing across the sky.

The stream has since been seen more than 1.7 million times and can be re-lived on NASA’s official NASA Meteor Watch Facebook page here.

The US space agency posted on Monday morning: “Tonight’s live stream will continue through the early morning hours as long as the weather holds.

“The stream is passive, meaning we don’t have commentary but have a camera set-up at NASA’s Marshall Space Flight Center in Huntsville, AL, of the nighttime sky for those wanting to catch a glimpse of a Perseid.

The Perseids meteors are the cosmic debris left in the orbital path of Comet Swift-Tuttle.

The giant space rock orbits the Sun every 133 years leaving a behind a trail of rubble known as the Perseid Cloud which the Earth crosses path with once a year.

When the planet approaches the littered orbit of Swift-Tuttle, the debris slams into the Earth’s atmosphere at high velocity.

The resulting meteor shower seen last night is the debris brightly burning up as it streaks across the starlit skies.

The Meteorwatch group explained: “Perseids are meteors, also known as ‘shooting stars’ that radiate from the constellation of Perseus, hence the name Perseid.

In the UK, the UK Meteor Observation Network (UKMON) kept track of the Perseids with its vast system of meteor detection cameras around the county.

You can explore UKMON’s webcam snapshots of the Perseid shower by clicking here.

The extensive gallery contains pictures of meteors streaking over places such as Loughborough in Leicestershire, Clanfield in East Hampshire and East Barnett in London.

The astronomical group live streamed the Perseids last night from its space observatory on the Canary Islands.

The live stream featured live commentary from Slooh’s resident astronomers and space experts who answered questions submitted by the public.

“It appeared during the prime meteor watching period just a couple of hours before dawn.”

You can watch the Slooh Perseid live stream hosted on YouTube by clicking here.

‘Unbelievable’ Video Shows 2 Bees Working Together to Open a Soda Bottle : ScienceAlert
Control of a 6-Qubit Processor in Silicon : ScienceAlert
The Pacific Is Destined to Vanish as Earth’s Continents Meld Into a New Supercontinent : ScienceAlert
These Are The Most Distant Star Clusters Ever Seen, And We Nearly Missed Them : ScienceAlert
Bitcoin’s Climate Impact Is Bigger Than Beef Farming – And It’s Only Getting Worse : ScienceAlert