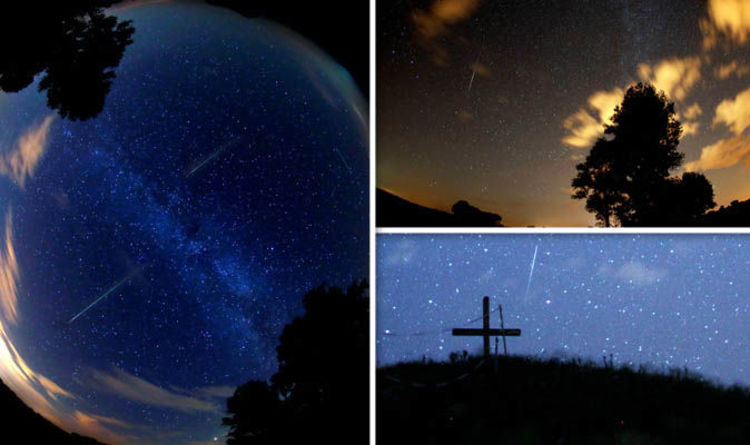 
Astronomy’s biggest show on earth will peak tonight, with many places around the world able to watch and catch a flash of the shooting stars.

The is an annual event which normally begins in mid-July, finally peaking in August.

Pictures show the wonderful scenes from across Europe, as astronomy fans have been enjoying the sights from pervious nights.

This year the meteor show will begin around 9pm local time tonight.

And by luck, stargazers will enjoy the perfect backdrop with dark skies from the new moon.

In the early hours of Monday morning around 2am BST will be the best time to watch the shower, when the Perseid radiant will sit high in the sky.

A radiant is the single point in the sky, where the shooting stars start to from.

The Perseid meteor shower is named after the constellation Perseus, as the direction of the shower appears to originate from the area.

Meteor showers occur every year when the Earth passes through their stream on it’s orbit, breaking up as they enter our atmosphere at around 134,000mph.

Seeing the stunning sight depends not only on light pollution, but very heavily on the weather.

According to the Met office the cloud coverage over the UK looks to be fairly patchy, so it may be a bit hit and miss for some of us.

If you are lucky enough to be graced with clear skies, the best place to enjoy it will be from large open areas that are far away from any light or even better in the countryside, where you are more likely to get crystal views.

According to astronomers David Levy and Stephen Edberg from the guide book ‘Observe Meteors’ they shared: “This year is an excellent year for the Perseids, because they will reach their maximum on a new moon weekend.

“Without any bright moonlight, skywatchers will be able to see many fainter streaks.”

This Is How Much Fossil Fuel The World Is Sitting on, And It’s a Time Bomb : ScienceAlert
Scientists Don’t Know What to Do With This Weird ‘Blue Goo’ Ocean Organism : ScienceAlert
There Are New FDA Safety Warnings About Breast Implants. Here’s What We Know : ScienceAlert
The Orbit of a Sun-Like Star Reveals The Nearest Black Hole Ever Found : ScienceAlert
A Stunning New 3D Model of The Cat’s Eye Nebula May Help Us Solve Its Mysteries : ScienceAlert