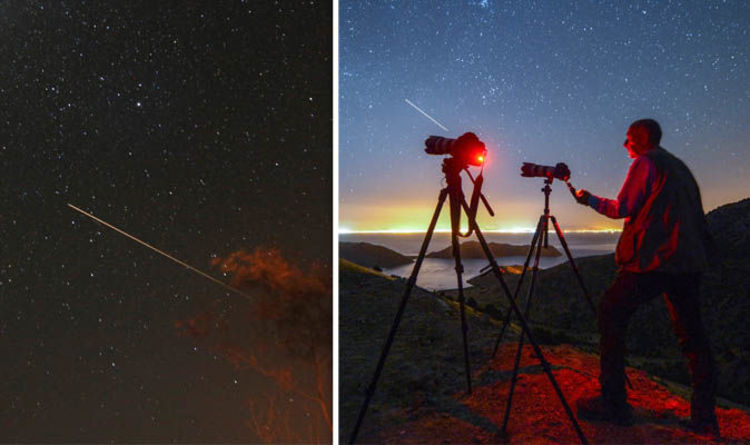 
Anyone who missed out on the Perseid shower peak this weekend will still have a few more night to enjoy the meteors, albeit in lower numbers.

The annual shower kicks off mid-July and lasts until the last week of August.

But the spectacle does not peak until around mid-August, making this the best time to see the shower.

This year, the shower was most intense between the night of Sunday, August 12, and the wee morning hours on Monday, August 13.

The Perseids will not return in full force until same time next year but until then stargazers can look forward to another five showers before the end of the year.

The next meteor shower to light up the night skies is the modest Orionid shower in October.

This year the shower is expected to peak on October 21 when anywhere between 10 and 20 fireballs dash across the sky.

Unlike the spectacular Perseid meteor shower, the Orionids are much more humble meteors and viewing conditions in October will be less than fortunate.

The presence of a bright Moon will wash out many of the faint meteors making them much harder to spot.

EarthSky astronomer Deborah Byrd said: “Unfortunately, in 2018, a bright waxing gibbous Moon interferes with the Orionid meteors for most of the night.

“Try viewing in the early morning hours after the moonset and before dawn.”

Orionid meteors appear each year roughly between October 2 and November 7.

Just like the Perseids are debris left behind Comet Swift-Tuttle on its orbit around the Sun, the Orionids are bits and pieces of space rock left behind by the famous Comet Halley.

Between October and November, the Earth nears the comet’s dusty orbital trail and many of the space rocks pummel the atmosphere.

When observed from the Earth, the Orionids appear to radiate from a single point from the Club of Orion in the constellation Orion – hence the name Orionids.

You can easily spot Orion by finding the bright star Betelgeuse and the Orionids radiate just north of the star.

But on the night of the shower, there will be no need to look for the radiant because meteor showers tend to burst out in all directions once they appear.

The Orionids are known for being extremely fast, zooming across the starlit skies at speeds of about 41 miles per second (61 km per second).

If you are hoping for a much more intense shower before the year ends you will have to wait until the Geminid meteor shower in December.

The Geminids are the cosmic debris of Comet 3200 Phaethon and will peak this year on the mornings of December 13 and December 14.

Between now and December 31, we will get to witness the Orionids in October, the Southern Taurids in November, the Leonids in November and the Geminids and Ursids both in December.

Watch A Great White Become an Orca’s Lunch in World-First Footage : ScienceAlert
‘Dark Data’ Is Leaving a Huge Carbon Footprint, And We Have to Do Something About It : ScienceAlert
New Discovery Means Parkinson’s Could Be Diagnosed With a Swab in Just 3 Minutes : ScienceAlert
Biology Inspires a New Kind of Water-Based Circuit That Could Transform Computing : ScienceAlert
A Famous Golden Palace in Spain Is Turning Purple, And Now We Know Why : ScienceAlert