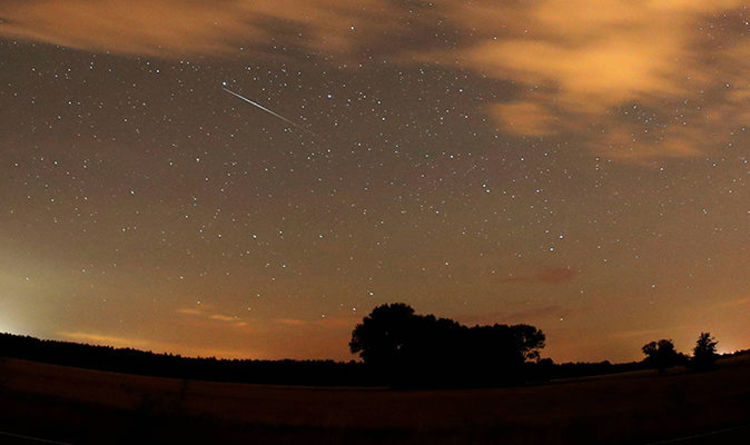 
And stargazers could be in for a special treat on Saturday night as a new moon will make the sky even darker.

Sunday night and before dawn on Monday will be the best time to watch the dazzling display – clouds permitting.

The fireball bursts is caused by debris from Comet Swift-Tuttle when it comes into contact with the Earth’s atmosphere.

Anyone lucky enough to catch the extravaganza will see 80 meteors an hour.

But people living in cities may struggle more to catch the shower.

Dr Robert Massey from the Royal Astronomical Society said: “The shower will be visible all over the UK, as long as the skies are clear.

“Unlike a lot of celestial events, meteor showers are easy to watch and no special equipment is needed, although a reclining chair and a blanket make viewing much more comfortable.”

The meteors are called Perseids because they appear from the Perseus constellation.

Affelia Wibisono, an astronomer at the Royal Observatory Greenwich, said: “Observers are in luck this year as it coincides with the moon setting shortly after sunset to leave a dark night sky.

“Light pollution greatly decreases the number of meteors visible so head out to the countryside and let your eyes become dark adapted by not looking at any bright lights for at least 15 minutes.”

The comet orbits the Sun every 133 years, with the meteors – the size of a grain of sand – burning up when they hit the atmosphere at 36 miles per second.

NASA’s telescopes in Daytona Beach, Florida caught the first signs of the “celestial fireworks” before they peak this weekend.

The annual Perseid shower starts around mid-July when the Earth approaches the rubble-filled path of Comet Swift-Tuttle.

But the meteor shower does not fully awaken until around mid-August when the Perseids peak in intensity.

Ancient Burial of a Young Girl Shows How We Carried Our Babies 10,000 Years Ago : ScienceAlert
We Just Got Our Closest View of Europa in 20 Years, And We Can’t Stop Staring : ScienceAlert
Amazing New Fossils Provide Earliest Known Traces of The Evolution of Our Jaws And Limbs : ScienceAlert
3 Major Aquatic Animal Groups Can Trace Their Lineage to This Ancient Armored ‘Worm’ : ScienceAlert
A Rare Condition Makes Hair Truly Untamable, All Thanks to These Genes : ScienceAlert