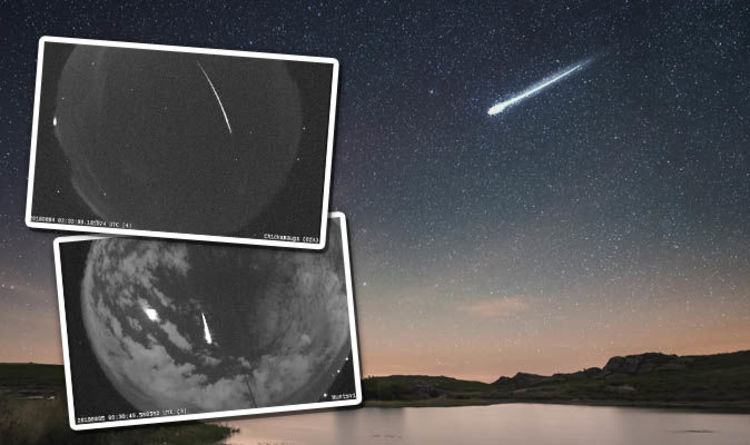 
The Perseid meteors are one of the most active meteor showers of the year with as many as 100 shooting stars appearing on an hourly rate.

The meteor shower is known for producing exquisitely bright fireballs streaking across the skies during its short peak.

The good news is you can watch the show here on Express.co.uk, courtesy of the Virtual Telescope Project, without having to leave the comfort of your home.

The annual Perseid shower peaks this weekend between the nights of Saturday, August 11, and the wee morning hours of Monday, August 13.

Astronomers at US space agency NASA advised the Perseids will be at their most intense around 2am local time on Monday morning.

But if the optimal viewing hours appear incredibly daunting the good news is all you have to do is click the embedded YouTube live stream below.

Gianluca Masi, director of the Italy-based Virtual Telescope Project, told Express.co.uk the Perseid shower is something no astronomer would want to miss.

Mr Masi said: “Perseids never disappoint the observer – they are one of the best astronomical shows off the year and we just need our own eyes to see them. Easy and cheap.

“Looking up for these meteors is a nice opportunity to discover the wonders of the sky and that there is beauty even in a fraction of a second.

“Surely, experiencing this personally is the best choice, but if it is cloudy outside or unable to reach a suitable venue, the online view offered by the Virtual Telescope is a great backup.

“You see, you cannot miss the Perseids show.”

The Virtual Telescope Perseids livestream will broadcast this year from the picturesque Perugia province in central Italy.

The stream will come from a telescope mounted at the hamlet of Castel Santa Maria next to the ruins of a 16th century church.

Weather permitting, viewing condition this year are expected to be practically perfect with no harsh moonlight to wash out the Perseids.

The August lunar cycle is currently entering the darkened New Moon phase which should keep the starlit skies dark.

Dr Helen Klus, Royal Astronomical Society, told Express.co.uk you might even be able to catch a glimpse of the meteors by peeking outside your window.

The astronomy expert said: “They should be much easier to see as they will be visible all across the sky everywhere in the Northern Hemisphere.

“You should be able to see them just by looking out of the window.

“However they will look best if you go somewhere dark and look at the northeast.”

The Perseid meteors are the cosmic rubble and debris left behind in the orbital path of Comet Swift-Tuttle.

The barrelling Haley-type comet completes a trip around the Sun every 133 years, leaving bits and pieces of space rock in its orbit.

Every year between mid-July and the end of August the Earth approaches this littered cosmic highway and individual space rocks enter the atmosphere.

The meteors burn up above the planet, producing streaks of light and brilliant fireballs.

The Perseids are named after their radiant point of origin in the constellation Perseus.

3 Major Aquatic Animal Groups Can Trace Their Lineage to This Ancient Armored ‘Worm’ : ScienceAlert
Biology Inspires a New Kind of Water-Based Circuit That Could Transform Computing : ScienceAlert
Secret Clues in Tutankhamun’s Tomb Reignite The Idea That Nefertiti Is Hidden Nearby : ScienceAlert
Hubble And Webb Pics Reveal DART Impact Was Even Bigger Than Expected : ScienceAlert
Control of a 6-Qubit Processor in Silicon : ScienceAlert