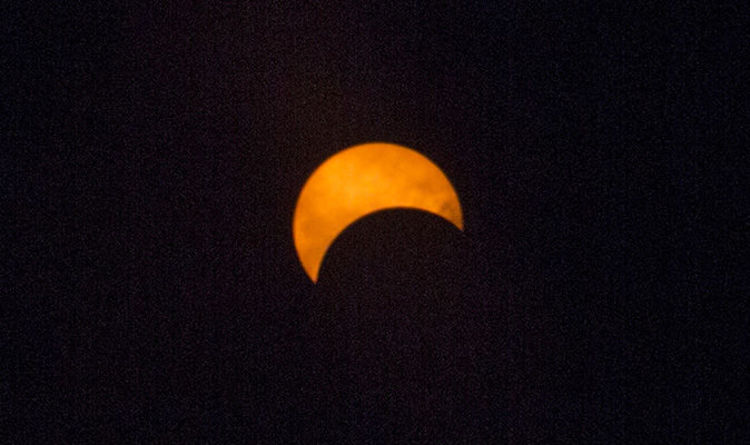 
Depending on where you are in the world, you may have been able to witness the Moon slightly obscure the Sun in a partial solar eclipse today.

Exclusively visible in the Northern Hemisphere – the Sun appeared to be shadowed by the Moon by up to 20 percent depending on your position.

Viewers of solar eclipses are advised to never look directly at the Sun, and either wear specialised glasses or viewing boxes.

A solar eclipse is damaging to the eyes as looking at the Sun can cause what’s known as ‘eclipse blindness’.

This is caused by retinal burns which occur when the powerful rays of the Sun damage cells in the back of the eye.

A pinhole projection can also be one way to witness the solar eclipse without the danger of damaging your eyes.

Making a pinhole in cardboard and holding it above a piece of paper on the ground can project the image of the solar eclipse without gazing at the Sun.

Stargazers have had a treat in recent months, as this lunar event comes just 15 days after the July 27 Blood Moon.

A Blood Moon occurs during a total lunar eclipse when the Earth passes between the Sun and Moon, plunging the Moon into shadow.

The Moon then appears red due to light refraction in the Earth’s atmosphere in which only reddy-orange hues can be seen – reflecting on the Moon’s surface.

There was another partial eclipse on Friday, July 13 but the lunar event had limited visibility.

This morning the partial eclipse began at 8.02am UT (9.02am BST) with the Moon beginning to encroach on the Sun.

The August eclipse began over the cold North Atlantic and Greenland before moving in a northeast direction.

At the same time, the Moon’s shadow appeared to move over Iceland and parts of Northern Europe and the North Pole.

However, this eclipse was not visible in the UK or US – with visibility in China, North and South Korea and Mongolia.

There was a live-stream of the eclipse, however, on YouTube channel The Eclipse Animator.

This is available to re-watch here.

For those disappointed they missed out on this eclipse, in less than six months time a full lunar eclipse will take place.

On January 21, 2019, a Blood Moon will grace the skies and will be entirely visible across the UK, North and South America and Northwest Africa.

The Orbit of a Sun-Like Star Reveals The Nearest Black Hole Ever Found : ScienceAlert
A New FRB Signal Has Buzzed Nearly 2,000 Times in Just Two Months, Raising a Mystery : ScienceAlert
The Real Reason For Using Flight Mode Is Not What You Think : ScienceAlert
Wolves Really Can Become Attached to Humans Like Dogs Can, Adorable Study Finds : ScienceAlert
Why House Fly Barf Is an Overlooked Potential Vector of Disease : ScienceAlert